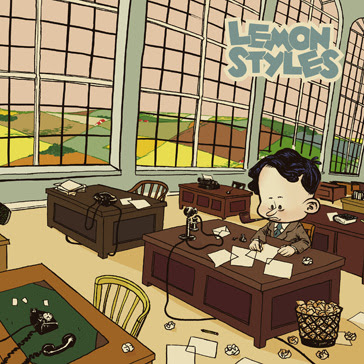 We often perceive comics as moving pictures - with the obvious plot complication and denouement - as opposed to art books, where the drawing deliberately stopped in time. «Lemon Styles» is a mix between a comic and an art book, with the clarification that this art book drawn by a comics fan and a man with a good sense of humor. This slim book is a collection of single-page strips with a repeating set of characters. They are three of them: the blonde with pierced ears, balding bespectacled man with a bow tie instead of a tie and long-nosed curly man with larhe eyebrows. On each page, they play some scene from everyday American life. This is King's neighbors, as they are represented to us by the author. Each page is divided into four panels, and that is plays obtained in four acts. In each of the plays at first glance, there is a plot, but I did not in vain called «Lemon Styles» art book as well. It’s good to keep on the coffee table and read a page a day, otherwise all the pages will be merged into one. David King on its pages captures something elusive, that moment between intention and the rejection of the action. And if you read the book in one read, important component of the book will disappear. The author has excellent sense of humor, but he applies this sense here in the opposite direction. When you read from page three panels of the four, it is clear that the fourth will be a gag: gag is that there is no gag. Behind this book we can see a great aptitude of David King, the next time I want to see how he can use his strange sense of humor in a large project.
Автор: Ray Garraty на 2:01 PM