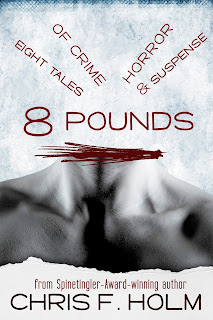 Chris F. Holm’s self-published collection includes eight stories, most of which has a solid weight, making the book, despite its name, much heavier than eight pounds. Holm writes in different genres: horror, modern neonoir, so-called "dark fiction." The word "dark" is suited the best to describe the entire collection of short stories.

Theme of childhood is very close to the author, and two story, opening and closing, are built on this theme. In the «Seven Days of Rain» in town for several days it rains non-stop, washing away everything in its path - including the secrets of the past. The protagonist of the story Eddie and his friends, when they were kids, played together, when their friend Timmy had an accident. The boys hid the body so that no one has found it. But the terrible flood washes away the remains of a body of the boy. One of his friends invites Eddie to go to the police and tell about what happened. But the secret of childhood days is even grimmer.

In the closing story «The World Behind» adult narrator at hot night can not sleep and remembers what happened to him twenty years ago, when he was a boy. His past keeps secret. The neighborhood boys teased him and mocked him. The boy began to seek refuge in the woods, where he meets a strange man who helps the boy to change his life forever.

«The Toll Collectors» tells the story of Ray McDaniel, the man of violence. For the first time in a fight in a bar, McDaniel felt a passion for violence and later went to work for bad people doing dirty jobs. For the cruelty they paid him good money. But here's the killer flees, hoping to start life over again, but go from himself is not easy, and the past catch up with McDaniel in the most unexpected way.
The best in the collection are the story with the title “8 Pounds”. It's brutal, exploding story about two best friends - and better to write no more about this story, so not to spoil the great fun.

In addition to excellent stories an advantage can be attributed, and it’s the price: it is not 8 pounds, it’s much much less.
Автор: Ray Garraty на 4:11 PM