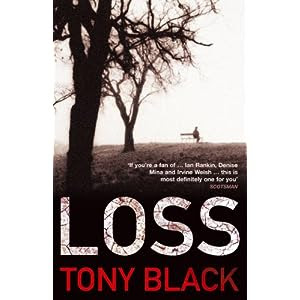 Given up on the liquor and only adjusted to life with his ex-wife ex-newspaper reporter Gus Dury in middle of the night has been waked up by the phone call: his brother Michael has been shot. Police assume that this is simply mugging gone wrong, but Dury does not believe that. In the house of his brother unexpectedly a lodger shows up who behaves in a businesslike way, Michael's partner in the factory business Prentiss is hiding something, though, and said that he would never have caused harm to Michael, and a few days after the murder Gus with his friend Mac finds a mutilated body of a former factory worker. All this suggests Dury to the idea that the murder of his brother has something to do with his business.

Tony Black perfectly captures and passes on to the paper Scottish city life, the life in it really boils. Protagonist emotionally describes traffic jams, street vendors, drinkers at the bar, snow and cold weather. In the mouth of the narrator's are put thoughts of the author on more social issues: refugees from Eastern Europe, surging into the country, unemployment, the collapse of banks, fake goods. The intrigue here is worse: an investigation now and then interrupted by reflections of the narrator on his brother, then on their worthless lives, then by visits to a psychologist that very much a nod in the direction of pop literature. These reflections and insertions have no organicity with whole text of the novel. Dury in the book is not a man who thinks his head and solves puzzles, and not even the one who asks questions to the right people. He is rather the one who knocks his fist in the answers from people who somehow are correct. (This is not Chandler rather Welsh plus Spillane.)

To not fall asleep in the middle and read up a predictable but catchy finale makes author’s style, rock, like a hammer, flavored with a solid layer of slang and Scottish words.