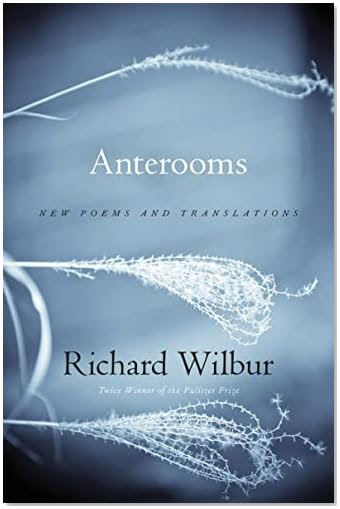 To write poetry in rhymes in English, when it seems all possible prosody have been experienced in a few centuries, one must possess great courage: to save it only can a special feeling of words, even breathing, and your own voice. In his new book, Richard Wilbur, who will soon turn 90, has proved that he didn’t lose his flair for writing good poetry, because he has not lost his own voice in so many decades.

Despite his age, in Wilbur’s poems there hardly the theme of death sounds, only theme of the fragility of life. The poet, who had been at war, whose life had been filled with a lot of big events, is now turning his attention to small things, but not insignificant for him: a worm crawling on the window, the tops of trees, orchard. Small things and small distances which Wilbur measures the long life.

Whatever my kind may be,
It is not absurd
To confuse myself with a bird
For the space of a reverie:

My species never flew,
But I somehow know
It is something that long ago
I almost adapted to.

Wilbur has shortness of breath; all his poems are often stretched for more than one page. Lines end at expiration, so that each poem ends with a whisper. In «Psalm» and «Trismegistus» the poet turns to God, trying to understand what his life was.

Shingles rhyme prevails in Wilbur’s verses, like a way to show: there is a beginning, birth, and the end, death, and life, then, indeed, is in the middle.
Among the translations «Thirty-seven Riddles from Symphosius» stands out, sly look at ordinary things.

Do not stop in the anteroom, come further.
Автор: Ray Garraty на 9:23 PM