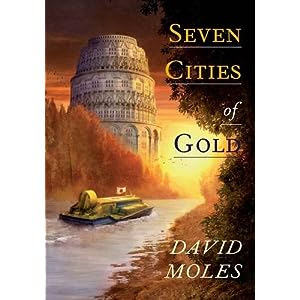 About our time. Muslims have reached the New World and started bloody battle with Christians. Shed much blood, even weapon of mass destruction was featured. This world is cruel, violent, poorly developed. There is no hint that the level of technology of that world is getting to that level of our world. In 714 AD, the history went the other way: seven Catholic bishops had fled from Spain across the ocean to North America to build seven golden cities and found the Christian empire. Japan, homeland of the protagonist of this novella, Chie Nakada, the doctor, does not participate in wars between Muslims and Christians. When the Japanese government hear about terrible weapons and about obsessive Christian leader, hiding somewhere in the depths of the continent, they sent a peacemaker (though with purpose to kill) Nakada to travel up the river Acuamagna in search of the leader Clara Dos Orsos.

While Nakada and her aides are floating down the river, on both sides of it opens a terrible picture: mountains of human corpses, fires, armed men. Nakada can not help anybody; she has a goal that should be reached at any price, to find Dos Orsos.

It really is a journey into the heart of darkness, the world after 9/11 as if there were never this date, but every day is always September 11; world crumbling, the world, where everyone slides on deaths, as on the water. The author essentially gives no guidance (place names say nothing to the reader), about the history of this world we know not from the author but the publisher, thus Moles makes it clear that his novel should not be read as some particular journey but as a metaphor of the journey to one’s own death and the death of all living, read like a hallucinogenic trip, during which death and life are irrelevant, they disappear as a concept from consciousness – Nakada is an opium addict, forced, even by power beating her "medicine" from people. The alternatively-historical component plays almost no role in the book, it clearly is secondary, the primary is the journey of the soul.

Moles has very poetic style, he tells this fast-moving story slowly, without admiring violence. Nakada is a charming drug addict.

«Seven Cities of Gold» is a brilliant book, an example of good fiction, but just fiction, not an alternative historical fiction.
Автор: Ray Garraty на 2:10 PM