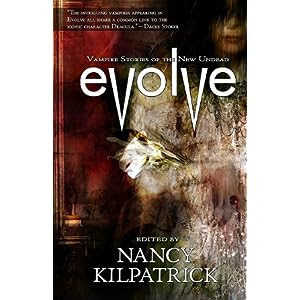 Decided to make an anthology about vampires, Nancy Kilpatrick took on a very heavy burden. There are so many books about vampires that make something stand-out is almost impossible. And an author, who writes about bloodsucking creatures, puts himself in bounds: the space is narrowed, the majority of moves is known so the creator of the book or even a story about vampires still writes like in a game setting or novelization. Walls from right and left - either reader will not understand, or publisher will not publish.

Editor of «Evolve» hadn’t expanded customary bounds, too, and hence failed.
In the vast majority of the stories here there are all the same Goths teenagers who want to either become a vampire, or become victims of vampires; vampire hunters and hunters on vampires, bloodsuckers clans; rather spirits and ghosts, rather than vampires; vampires-musicians. Some stories are written better, some worse, but the style does not help the situation when the whole point anyway is reduced to the bite.
However, the book turned out not completely disastrous, if we assume that some stories were better than average. Kevin Cockle in his «Sleepless in Calgary» comes from the premise that to become a vampire can not through bite of a vampire, but only if you want yourself and drink the blood of other people. The author puts the protagonist in front of choice: a boring monotonous life of a person or free, not burdened with the work existence of a vampire. That's just is a bloodsucker worth a trust?

In Bev Vincent's «A Murder of Vampires» someone kills vampires. Nobody wants to help them, but one policeman. He takes this case. The story is not quite carried through (no explain of motives of the murderer), but the relationship between humans and vampires are written in not a trivial way.

Two of the most powerful stories were placed in the final part of the anthology. In «How Magnificent is the Universal Donor» Jerome Stueart there are virtually no vampires (at least those that originate through Stoker's Dracula). The story can be attributed to pure science fiction, and this is the definite plus. After the spread of a mysterious virus BDD, which kills 40% of carriers, to find a man with an almost perfect blood tests is nearly impossible. In the blood of people there is a virus or chemistry to treat patients. Doctors still find one person who has an ideal blood, hoping to use it to heal millions of patients. But the husband of carrier of the ideal blood (it’s a gay couple) does not trust doctors: they have forged the death certificate of his partner and does not let him see the body. This man has to pretend to be a doctor to get into the Medical Corps, where the doctors are going to remove all the blood from the kidnapped. Heroes of the story turned out some cardboard (taken as if straight out of 50's science fiction movies), but the plot did not require realistic characters.

Kevin Nunn in «The Sun Also Shines On the Wicked» tells the surprising story of how a vampire can sunbathe. To do this, he needs only a mirror and an assistant, watching over time. This story is not just a story with an inventive plot, but also a meditation on what is an eternity.

In general, the anthology is not as good as could be.
Автор: Ray Garraty на 1:51 PM