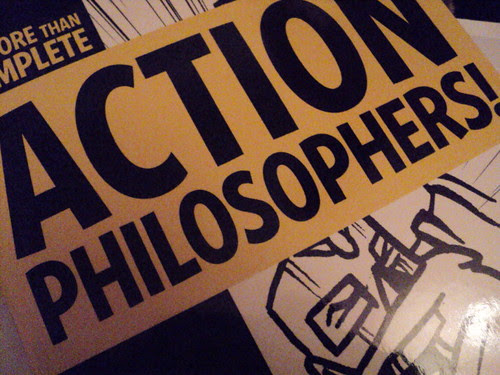 A good idea occurred to the writer Fred Van Lente and illustrator Ryan Dunlavey: to portray the teachings and works of philosophers and thinkers of the past in the form of comics. Incarnation came to 320 pages in A4 format, so that this book can surpass some of the standard, consisting of letters, books on philosophy by the volume.
This book can hardly be regarded as a textbook, though it is not just an entertaining comic book. In the collection there are at least two layers, so that there are at least two approaches to read it.

Comics can be read as a guide to philosophy for a sort of lazy teenagers, for whom the word philosophy is almost not pronounceable, and Superman and Batman mean to their lives much more than Aristotle and Freud. In an accessible and beautifully illustrated form the book finally tells young people how the Stoics differed from the Cynics, how Spinoza earned his living, what were the major differences between the teachings of Jung and Freud. The authors of the book in chapters about each philosopher present a story about him in the form of biography, adding to it basis of the teachings of the thinker.

If you know philosophy or you are not interested in some of the philosophers, additional layer can be omitted, enjoying only the graphic stories. And here is something to see: Diogenes as a dog; St. Augustine drinking straight from the bottle in bed with two beauties; Schopenhauer in his underwear, watching TV; Karl Marx and the three little pigs. Philosophers there indeed produce an action, the philosophy here is not boring mutter.

The book is naturally very funny (perhaps only philosophers of the XX century have turned dull), you will not fall under the table with laughter, but the smile will not go from your face, that's for sure.

Philosophers would have liked it.
Автор: Ray Garraty на 4:02 PM