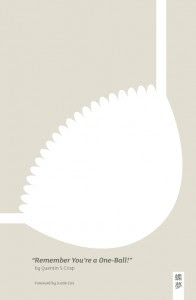 This novel, before Chomu Press publishid it, was rejected by many publishers. This is quite understandable: the book is quite strange, moreover, it is not well written.
A story unfolding before the reader is notes of a young man named Ramsey Blake. He graduates from university, does not know where to go for as long as he is invited for an interview with director of the school where he studied. The director, while interviewing Ramsey, suggest to future teacher that he is very suitable for the vacant position: Ramsey himself a graduate of this school. So tired student begins to work in school, teaching junior classes. There he meets a girl Jacqueline. Ramsey clearly suffers from mental illness: he is afraid of people, barely controlled by his mind, besides what he says about himself: «I may have had sex, I had certainly never fucked anyone». Life with Jacqueline takes really stressful for him. In parallel, he wrote the note, where he tells the story of his classmate who was teased one-ball. This oath, one-ball, went from children's song:
«Rule Britannia!
Three monkeys up a stick.
One fell down and broke his dick.»

Of his classmate Harley Owen, of abusing him, of child abuse and worldwide conspiracy, Ramsey remembers (and read about that in the dossier passed to him by the director) because in that class, where he has learned, there is another one-ball, Norman. Both boys really have one testicle: a second one children hurt in accidents, so it should be deleted.

Soon Ramsey finds a link between the two cases and sees the mysterious behavior of the director and reading a book titled "Learning to say" yes ". He understands a lot, but could understand one thing: a place devoted to him in this story.
If the narrator can not until the last minute understand what is his role in the story of two one-ball boys, reader understands that after only three dozen pages. This however did not spoil the whole picture: the novel is already written in a very uneven way. The book is heavily skewed, as a face of the person that does not like anything. This, of course, is a multi-faceted novel: there are the memories, the memories within memories, records, excerpts of self-learning book - but it seems that the fragments are often not in own place. Some fragments (for example, Harley Owens’s dossier) would have looked good in the form of short stories, but among the clutter of other fragments the best places lose their luster. Convincingly described the history of child abuse was almost nullified by unconvincing explanation of the origin of one-balls.

The author has the ability, of course, but if you ask me, whether I liked the novel, I will just shrug my shoulders.
Автор: Ray Garraty на 5:23 PM