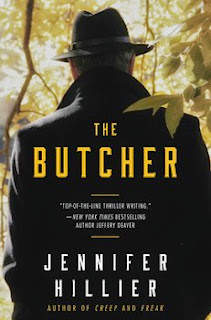 In 1985, in Seattle a serial killer hunted young, single girls. Chief of police Edward Shank accompanied by other armed police officers during raiding the house where the suspect lived killed this suspect, known pervert Rufus Wedge. The dead suspect by circumstantial evidence is recognized as the maniac nicknamed the Butcher and all 17 kills were blamed on him. Case was closed immediately because of the death of the suspect, Shank received the glory, the Butcher became the thing of the past.

The action moves to present times. Now Edward is already 80, he is a widower, not able to care for his Victorian house, and prepares to move into a retiring home. The house is passed on to Shank’s grandson Matt, a successful chef who became famous because of his Filipino recipes acquired from his grandmother. Matt has already moved into the house of his grandfather, and Matt’s girlfriend, Samantha, expects that she will move in with him. But Matt is going to focus on his business and does not want to be distracted by love affairs, offering to leave the relationship with Sam as they were. Jason, a friend of Samantha and Matt, does not understand such behavior of his friend, but Matt still stands on his own.

The action switches between all the characters of the book, one by one. All cards are laid on the table at the very beginning of the novel: the real Butcher wasn’t Wedge, but the chief of police Shank. From the flashbacks we learn how he chose the lonely girls, took them into the woods or to his home, raped them, cut off their left hands and a strand of hair. Shank also killed his wife by staging her death as an accident.

Only lazy are not writing books about serial killers, and usually the result is absolutely unreadable. The area, which was chosen by Hillier for her novel, is famous for its serial killers. Be that as it may, the author apparently was too lazy to learn all the features of maniacs and their captures. If The Butcher would have been written as a parody, it could have been readable, but Hillier remains serious throughout the book, and the novel itself moves down to the level of parody – it just is not funny.

Hillier made such a mess of the fact and fiction, that the novel can be disassembled chapter by chapter for factual and logical mistakes. Blame the negligence and carelessness of the author, too lazy to somehow link the story of the book with reality. I will say nothing about coincidences and annoying love angle.

Since the cards are open from the beginning of the novel, the criminals and their deeds are known, all that remains for the author is the plot device, its surprises and twists. And plot is not Hillier’s best side, even on the contrary - the book is predictable from exactly the moment when Hillier discloses the identity of the main characters. Every move is predictable on five steps ahead. Add to this the fact that of the three main characters in the book two are killers, then you can only sympathize with the female characters.

Predictable thriller is the worst punishment for the reader. This thriller breeds boredom. Hillier is trying to disperse boredom with gory details. Grandson finds grandfather's "trophies", and it is strange that the maniac would leave his treasures in the house, where he no longer lives. And if it comes to that, Shank left home at odd circumstances: he began to kill again, and to do so it would be easier at home.

In the parody, the bad one, the novel transforms with individual scenes. The bear appears from nowhere in the woods and scares the serial killer right at the time when the maniac prepares to kill the victim. 80-years-old Shank with erection in his pants hunts young victims. With special lust thr author describes sex between 80-year-old persons, and the maniac, of course, uses a condom. Stranger from the forum suddenly interrupts her story and leaves without naming the killer. The book will make you laugh out loud, though, it will be awkward laughter, as if laughing at a disabled person.

Even worse than plotting are Hillier’s descriptive abilities. Women in the book are perceived and described as sex objects, no matter from which point of view are written chapters, Sam’s or Shank’s. Love triangle is handled extremely rough and constantly distracts from the main action.

Dialogues are those as if taken out of the teenage horror movie. Shank in 1985 mentions DNA, although DNA was still known only to scientists in laboratories. Anyway, the police chief in the role of a serial killer is not even a bad taste, it’s elementary laziness and stupidity.