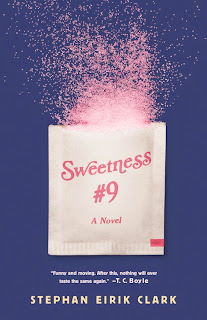 Summer 1973. Rutgers graduate David Leveraux gets a job in a lab of a large chemical giant. This is actually a dream job for David. In a group of researchers, he will be engaged in testing food sweeteners, which is the corporation’s specialty. The protagonist works as a Flavorist-in-Training testing sweeteners on rats. Every day he has to watch the group of experimental rats, add a special sweetener to their food and drink, record the results of the behavior of rats.

In the laboratory David’s colleague becomes an Englishman by birth, Charles Hithenbottom, not too friendly, single, childless and divorced. With David, they almost do not communicate. Hithenbottom works in a nearby lab with similar experiments on chimpanzees.

Time goes, and David begins to notice changes in rats under the influence of sweetener "Sweetness #9». Rats are starting to put on weight, they become lethargic, they reduce activity, lose the will to live, one of the rats trying to commit suicide. David is trying to attract the attention of colleagues to these rats, however, Hithenbottom ignores the young colleague. The boss advises not to bother him. For the compamy it is only important that the sweetener won’t cause cancer. David is trying to raise hell, the security throws hom off the territory of the laboratory. David is fired.

Despite the "sweet" title, the novel is not mawkishly sentimental at all, on the contrary – one that leaving a bitter aftertaste. Stephan Eirik Clark condemnes American (and partly international) society, but leaves an open verdict. Where is the cause of dissatisfaction with life, in us or outside of us, in external sources? Do the food additives control us, making us dependent and unhappy, or whether these additives only affect the taste of the food, but not anything else? Clark sows a seed of doubt in the minds of readers. What do we really know about our bodies and the process of thinking, when we can not even deal with relatively simple nutritional supplements.

Fine social satire are skillfully adapted to the family saga during one generation. Leveraux family is a little less typical than typical American family, but all the diseases are visible. Each family member has a disease in the literal and figurative sense, but as a social unit the Leveraux is too far from healthy existence, having a common ailment. Head of the family is suffering bad conscience, daughter worries about her sexual orientation, the youngest son almost closed in himself, wife is worried because of the excess weight and coldness of her husband. As a team, the family does not seem to have degrading ailments, but the general dissatisfaction with life does not live them in peace.

Family chronicle peacefully coexists with the views on science, and the plot is driven by anti-utopian elements (not that superfluous here, rather unexpected for the overall tone of the novel) and the thriller elements related to trade secrets. The book seems really to contain an addictive sweetener. You won’t take a break from Sweetness #9, though, that the book is hardly a page-turner.

Clark pays closest attention to detail, has broad outlook, the utmost certainty in many areas, from online shopping to work of filling station. Miraculously, the author weaves in a fairly realistic story a half-myth/half-fairytale about the Hitler’s chef.

Sweetness #9 is a clever and charming book, extensive and relevant. The novel grabs you also by the fact that actually does not open all the cards. What in the book is actually the truth about supplements and what was invented? Whether or not Hitler had a special chef? Hell knows. And it does not matter when the book is so good.