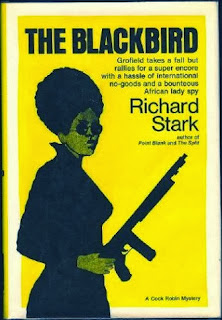 After heist gone awry Grofield (Parker’s partner and hero of four novels, of which this is the third) ends up on a hospital bed surrounded by secret government agents. Thief and part-time actor is offered a chance to atone for his sins against the state. Charges of robbery will be lifted if Grofield helps the Secret Service to find out the secrets of the Third World countries. Somewhere in Canada a secret meeting of top officials of nine developing countries is planned and Grofield must ingratiate himself and find out what caused the meeting. Grofield is selected only because he is familiar with the leaders of the two countries - General Pozos and a politician Onum Marba (see The Damsel and The Dame). Grofield prefers intelligence job to prison term but plans to escape from the agents. He fails to escape and Grofield is delivered to Canada.

The premise of The Blackbird is very similar with the premise of another Stark novel The Handle. There FBI agents forced Parker to work on them and rob the casino. The Blackbird is more slowly than The Handle: almost half of the novel Grofield jokes and plays the fool, the sense of danger is not in sight, as if Grofield came to Canada at a ski resort. When Stark adds in his novels international intrigue, it is not very good. But the novel is good in that each Grofield’s choice is accompanied by the question "What would Parker have done in the Grofield place?".

Closer to the finale the book gains speed and Grofield has to make a difficult moral choice. The Blackbird, perhaps, is on the same level with The Damsel: entertaining, but far from ideal.