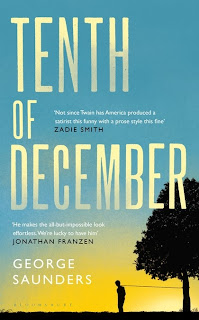 George Saunders obviously does not like plots. Of the ten stories in the collection, only one has a standard narrative structure with progressive storyline. In all others only a few pages in you star to realize what's going on, plodding through the so-called "mind games." But this is not to say that Saunders’ prose is plotless. Not at all, there is a distinct plot in each story of the collection, although in the case of Saunders it is sometimes impossible to divide his prose into individual components. In his case, the style is a plot, and a plot is the style.

The most straightforward story in Tenth of December is called «Home». In it a war veteran (whether in Iraq or Afghanistan or wherever else Americans are still fighting), a young man, returns to his hometown, to his mother. She works in the church, does not pay for her house, causing her and her new boyfriend evicted. The former wife of a soldier ran away from him, apparently, already pregnant, and now remarried to the son of wealthy parents. With her new husband she has a son of the war veteran. His ex-wife does not allow to see the child, the sister is afraid to let her brother into the house, his mother is evicted, and the soldier is quite lost in this life in the civilian world. He becomes aggressive, beats the landlord, almost ignites his mother’s house and wants to beat new husband of his ex-wife up.

The story seems to be sad, but actually it is quite comical, perhaps it is the funniest story in the book. Mother of the protagonist swears in every sentence, but right with self-censorship, in the truest sense beeping her curses. Everyone says "Thank you for your service" to the protagonist, at the wrong time, and in general all behave nervously.

Starting and closing stories of the collection looped book. «Victory Lap» and «Tenth of December» have similar plot and the problem of moral choice. But the action in both of them takes place in fact not so much in "reality", but in the minds of the characters.

«My Chivalric Night» is most similar to previous Saunders’ works. Here, too, people play a certain role in the organization that reminds amusement parks of the stories from Pastoralia times.
Saunders is a superb stylist. Fascinated by the author's own words, the reader may not notice the plot. Most often the characters in his stories are people that unhappy and lonely. They can not communicate normally with the outside world, which is why so much time Saunders spends in the minds of his characters. It is much easier and more pleasant to talk to and live within yourself.
To someone Saunders’ stories may seem bleak, but gloominess should not set off the fact that Saunders is still an optimist. Most often there still is a way out of the abyss, you just need to find it. And also specific humor will cheer you up.

Stories’ main characters here are mostly dreamers. It is interesting to be in their heads, for Saunders and for the reader. Saunders does not oppress his characters, giving them the freedom and opportunity to talk. But sometimes he loses a step. For example, in «Tenth of December» a boy named Rob says that a dying man Eber “looked sort of mental. Like an Auschwitz dude or sad confused grandpa.” But it is too little likelihood that a young boy would choose precisely this comparison to an Auschwitz prisoner. An adult would have thought of that, more likely.

It is worth noting - and someone will put to fault - that Saunders repeats himself in this collection. I do not remember much of his early books, but there is a feeling that part of the story techniques migrated here from the previous books, the style remained the same, of course. You will not find new themes here, but degree of grotesque and fantasy decreased.

Perhaps someone instead of Tenth of December will prefer to reread Pastoralia.