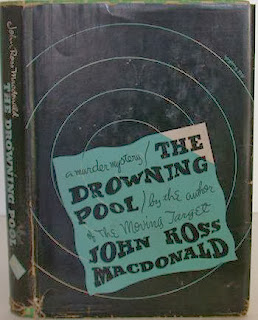 In the second Lew Archer novel LA private detective is hired by a mysterious woman from a small town. She is married to an actor, a mama's boy, who lives with his family in his mother's house and is dependent on monthly handouts from her. The woman asks Archer to find the author of the blackmailing letter. Blackmailer gently hinted that he was aware of the woman’s affair. The woman is afraid that the letters, originally addressed to her husband, will continue and will get into the hands of either the husband or her mother-in-law. Archer takes two hundred dollars from the client and begins to investigate. Very quickly in the case of blackmail the first corpse appears.

The Drowning Pool is a short entertaining book, in which Archer cracks jokes, wealthy families do not have peace and friendship, and young girls hang on the detective one ager another. This novel can serve as an excellent textbook on the topic «Noir vs PI novel». Closer to the finale one femme fatale kills her husband and asks Archer to destroy the evidence and run with her to Mexico. Whether this book was noir, Archer would have done it without a doubt. But thinking over in his head the possible consequences (including the most unpleasant, the electric chair), the PI refuses this dubious future, and that is what makes the book a PI novel.

Among the curious moments worth mentioning here is Archer’s literary knowledge. He does not know who Dylan Thomas is («... father likes his poetry and I tried to read some of it but I couldn't understand it. It's awfully difficult and symbolic, like Dylan Thomas." The name rang no bell.») , but calls a gambler loser Dostoevsky - «"Stick around, "I told the young Dostoevsky.» Apparently, Archer is more fond of Russian literature than of British.