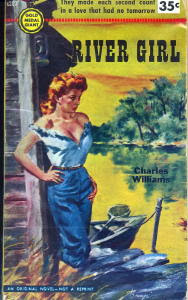 A part of Forgotten Friday Books

Jack Marshall is a deputy sheriff in a small town. The judge's son, the young Jack is in good standing with the citizens, especially those who run the dens and brothels. Sheriff and Jack allow homes of sins exist and prosper, but for taking a bribe that Jack accurately collects every month. An active member of the Christian organization wants to close all brothels, at the same time sending crooked cops to jail.

But the problems with the grand jury for the deputy sheriff go to the background when the meets a beautiful woman with a funny haircut, living in a small house on the river bank with a suspicious husband. Jack and "river girl" by the name of Doris fall in love, and Jack starts to come in the evening to the river to see Doris. Lovers are going to run away together when her Doris’ husband, Shevlin, finds them in his house. In the struggle Jack kills Shevlin and comes up with a plan to cover up the murder and escape with Doris away.

It is not hard to guess that everything goes completely wrong, not as Jack has planned. In noir a perfect murder does not happen. River Girl is one of those noirs, which are written in the first person, and where the reader's own throat starts to feel a noose on his neck, tightening.

The novel, however, is not without drawbacks. It suffers from a large volume, and the motives of the characters are sometimes not clear. If the reader is willing to forgive the author the plot holes, he will receive a tense novel.

I had problems with a few episodes. When Jack kills Shevlin, who is an escaped convict, living in the swamp, he could not have any plans to cover up. The disappearance of practically an unknown man from the backwoods would have noticed no one, especially since Shevlin is constantly on the run, changing the place of residence. And the representative of the law Marshall would had to think about it before he acted rashly.

Later in the book for Jack another woman falls, Dinah, the sheriff's mistress, which saw in Jack «excitement». But at that time Jack was exhausted with problems, always worried because of the murder and the grand jury, and at first sight to have seen something exciting in him would be doubtful.

But it is my grumbling. In fact, River Girl is a classic of noir.

Soon to be reprinted by Stark House Press