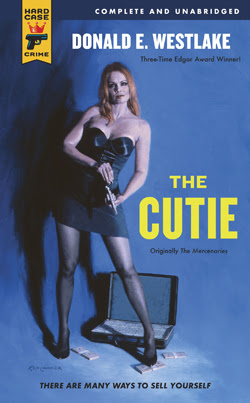 Donald Westlake
The Cutie
(originally published as The Mercenaries)

Clay’s night sleep is disturbed by the familiar heroin addict named Billy-Billy Cantell asking Clay for help. Clay works for the organization (read: mafia) as an “accident man”: he arranges accidents on the orders of his boss Ed Ganolese. Cantell is scared to death: he woke up in a strange apartment with a dead girl lying behind him. Hardly having time to escape before the arrival of the police, Billy-Billy leaves in a flat hat with his name and fingerprints all over the apartment. Small-time dealer and user sure did not kill the girl, and Clay believes him: someone framed Billy. In another situation, Clay would simply arranged an "accident" for the addict, so Billy during the police interrogation wouldn’t betray the secrets of the organization (Cantell is not just user, but also a heroin dealer and also works for the organization), but Billy during the war met impotrant people from the European organization, and you can not just kill him now.

The police immediately visit Clay’s apartment, where he hid Billy, but when the cops leave, Billy escapes through the window already. Now, half of New York City Police is looking for a two-bit user who, they believe, killed the girl, Mavis St. Paul, who was the mistress of an influential old man with big connections. And Ed Ganolese tells Clay to find Billy before he will make great wrongs. And in addition to Billy, Clay must find that cutie, who framed Billy and brought so much trouble for the organization.

The beginning of the novel may seem a bit familiar, but, believe me, this is only the beginning, further in the novel there will be a lot of surprises, so that everything will turn upside down. «The Cutie» is Westlake's debut novel under his own name (he wrote several softcore novels before that one), and what a debut it is! Westlake writes sparingly, with humor, but let humore not to fool you: the book is very grim, and the finale is starless night.

Cutie from the title of the novel is by no means the girl from the cover, but the man, who framed the unfortunate Cantell, and later gave more than one trouble to organization. Westlake, which tells the story from Clay’s point of view, strikingly demonstrates, step by step, cutie’s tricks, so we are on one side with Clay and his boss, Ed, and also want to capture the villain immedietly.

Here is a quote from the dialogue, when Clay and Ed discuss the cutie:

«"Okay, "said Ed. "Okay, okay. He asked for it. He went a little too far this time, Clay, he got a little too cute for his own good. The cops have Billy-Billy now, and that means they'll close the goddam case . That means he's ours, Clay. That son of a bitch is ours, we don't have to turn him over to the law at all. "

"Neither did he, the bastard. But I'm thinking about it. Clay, I want that son of a bitch more than ever now. I want him right in front of me. He's mine, Clay. You get him and you deliver him to me. That little cutie has got just a bit too goddam cute for his own good."»

Westlake in his novel finds a balance between the classic detective story and a thriller about the mafia. Clay in the middle of the novel tells to his beloved Ella how he got into the organization and how he, a pretty and educated man, became a mercenary and hitman for a criminal boss. Clay is not deluded about himself: he is who does what he is asked, he is a murderer, but only when it is necessary for bussiness. The heaviest choice Clay will need to be done is choosing between personal life and work.

«The Cutie» is a novel of immense power, coldly written, a poem in prose about that there are no good people at all. But good books there are, and this is one of them.
Автор: Ray Garraty на 3:04 PM