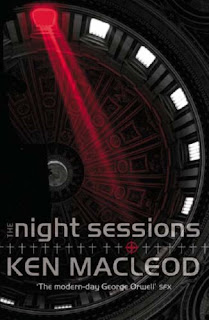 2030s. Because of the endless wars for the faith at the beginning of the XXI century religion is not entirely banned, but believers become silent and weak minority. People no longer say about god that faith will not overcome by the mind and the soul of man. But someone suddenly starts killing people associated with religion. In Scotland, a local priest is blown off and then bishop is shot, and it becomes clear that these murders are linked. Detective Inspector Ferguson and his team must find who is responsible for a series of murders committed. The lives of thousands of people are in danger.

If the near future, which is described in Macleod’s novel, seems not too convincing, the plot - the police investigation - redeems this defect. Ferguson is quite a standard inspector, he is not engaged in self-destruction, not committing unfair moves, he is an exemplary family man, without drinking problem by the way. Investigation of the murders brings Ferguson and his team to a sect of robots, and this is the gusto in this book. Robots in the book are more humane than people. The detective and his men are described by the author with such reluctance, as if all the people are boring. That's why Ferguson in entire novel behaves exactly like a robot: he is almost devoid of feelings, not even showing a peculiar desire to complete the investigation. Robots, on the contrary, they feel and show their feelings a lot more than people. Macleod describing robots uses most delicious details, robots here face moral choices. And indeed the protagonist of the novel can be considered a leki, a small Tripod robot working with Ferguson in the pair.

«The Night Sessions» can not be called a perfect novel. Mystery line is fascinating, but too slow. The future is in the book in general is unbelievable, but it is inventively in detail. Certainly robots will like this book.