The sequel to the collection of Dr. Seuss «Dr. Seuss Goes To War». What is interesting is that this collection of The World War II caricatures and cartoons, so this is the fact that it contains not only cartoons by Dr. Seuss, which became known mainly through his children books, but by also other artists of that time, who published the cartoons in newspapers and magazines.
Cartoon is a type of art that should immediately cause a smile (and even better laugh), but at the same time cause embarrassment. This is a sign of good cartoons. Ironically, the works of the doctor Seuss are not impressive. Whether they are too parochial, understandable only to the Americans, and even then not to all, or graphics are clumsy, but the fact is that the drawings of Dr. Seuss do not raise either smile or embarrassment. Despite the extensive commentary by Andre Schiffrin to each section of the book, explaining the situation in the U.S. in the late 30's and early 40's and the government's attitude to U.S. military operations in Europe and the Pacific ocean, these comments are still no substitute for knowledge of the inner and foreign U.S. policy in wartime. 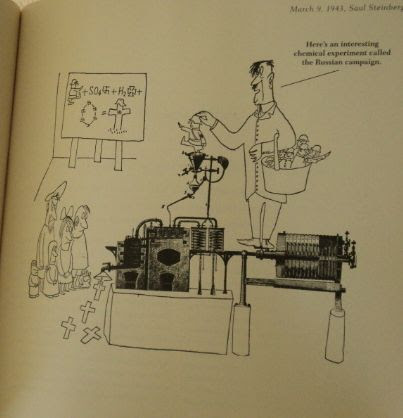 Nevertheless, the book is a success, thanks to the work of other artists of the forties. Cartoons drawn by Saul Steinberg, Melville Bernstein, Al Hirschfeld, John Groth, Eric Godal are far wittier and more inventive visually, than the pictures by Dr. Seuss. These cartoons highlight the inner life of States and the war with Nazi Germany. They are simply easier to understand for Europeans, and even without commentary. Caricature is the same joke, and if you begin to explain the effect is lost. Especially there is worth mentioning the work of Saul Steinberg. He is a true master. In the book he is represented by single cartoons and short comics. He draws in a number of pictures Hitler so fun that you laugh to tears. He has a very simple drawing style, but he feels a joke on a subconscious level. Every one of Steinberg's cartoons are fun. 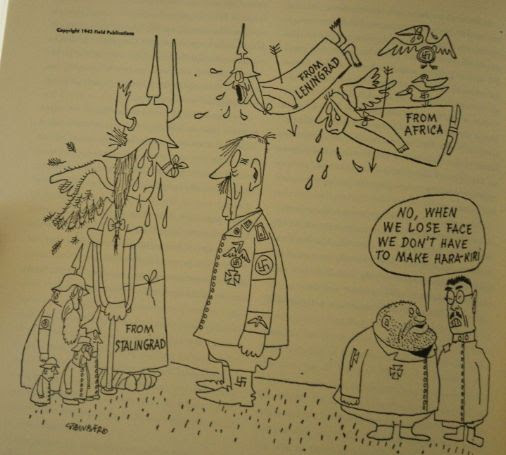 The book covers the period from 1941 to 1945-th, and there makes fun of everything, from Stalin to Japanese kamikazes. «Dr. Seuss & Co. Go To War» is an excellent tutorial on the history, and most importantly - very funny one.