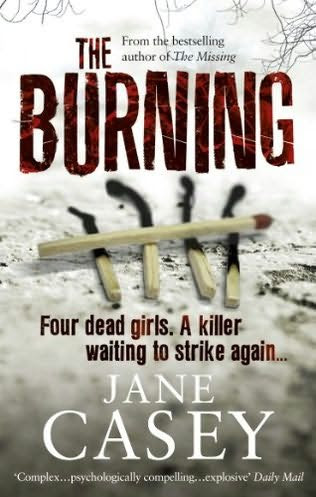 Brutal maniac beats young girls to death and then burnes their bodies in the London parks. In the first chapter, young party girl takes a friendly cabbie for a murderer and stabbes him several times with a knife. As it turns out later, an elderly man is not even a maniac, but a girl have gone too far from self-defense. Soon, however, police find another one, the fifth, victim of serial killer. Detective Constable Maeve Kerrigan in middle of the night goes to the murder scene. But Kerrigan has suspicions that a fifth victim of serial killer is not even a maniac’s victim, but an unrelated murder disguised as The Burning Man, as the media call him. Kerrigan begins in parallel to investigate the death of the fifth victim and seek to the ill psychopath.

Strangely enough, but the most interesting storyline of this book was abandoned in the first chapter. Casey began her novel unexpectedly: a girl cuts the well-wisher almost to death, and for excess defense goes to jail (as we already know in the ending of the book). Whether such a beginning was intended to shake the reader's emotional, or to knock him off, but the unpredictability is over and then begins a standard mystery in "British police procedural"-style. Detective Kerrigan, of course, solves problems on the personal front, grabs the investigation, "instinctively feels," that "something is wrong here." The storyline with a maniac invokes at least confusion. Casey gradually takes the intrigue of a maniac to the murder, which was disguised as a maniac’s killing. But the poor fellow The Burning Man turned out mannequin too: he kills, when the author needs it, he’s caught, when the author needs it. In the end, the maniac is forgotten. Casey after all could not balance the two storylines. I do not care, have read and forgotten, but that fans of books about serial killers will be terribly disappointed.