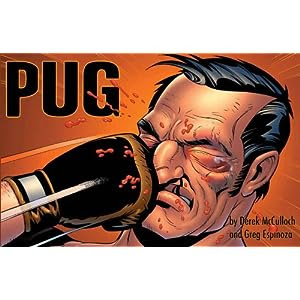 Writer Derek McCulloch and artist Greg Espinoza do not hide in their afterword that the creation of this graphic novel was influenced by their passion for old black and white noir films. The story of former boxer, who quit the sport and forced to make a living by helping the bad guys, actually originated in the 30's of last century, but what even until the plot is striking because is the art of the book.

«Pug», as a film noir, is drawn in an old-fashioned black and white style. By removing all unnecessary, the authors brought their work closer to reality. In the novel there are no beautiful scenes, no broken noses in public, no girls undress in front of a hero, it all remains outside the page.

Jake lost an important fight a few years ago. At the same time his wife with his son left him, and a former boxer now lives with a stripper named Kitten, surviving on a one time job, then another. Drinking in a bar, Jake meets with one guy who is offering Jake a permanent job almost for free. Already at the first working day Jake realizes that the work is not dusty, but not of his type: with a blad man in glasses they go from house to house, knock out debts from gamblers. The pug does not tell Kitty about it: he is ashamed that instead of the normal work he received a dubious job of a muscle at a loan shark. Desperate, but not lost his conscience, Jake comes into conflict with his weasel-employer. 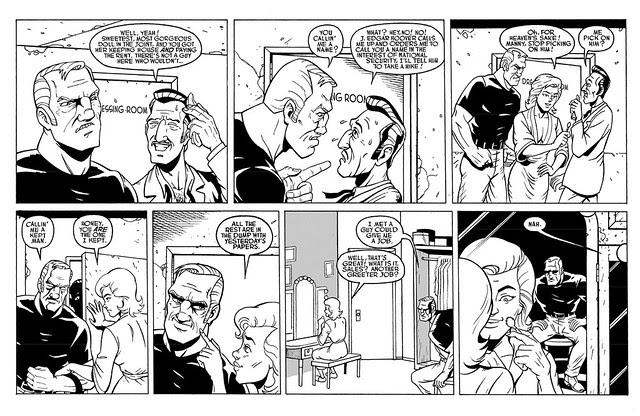 «Pug» is a generally very chamber story, you can count the players here on fingers, and the main action takes place inside Jake: Does he break under the pressure of circumstances, or not? What looks flimsy here it's flashbacks, from which we learn how Jake lost the fight that put the cross on the pug and why he still suffers from the leaving of his wife and son. Past is shown too messy, it has more action, and it does not allow us to see what's going on in heart and mind of Jake.

The pug, if not to take the episodes from the past, until the very end does not even use force, main battle is in his head. And the entire novel, in fact, says one simple truth: if you can, avoid a fight to the last. But if the time has come, then fight to the last. Do not lose in second time, as has already happened once.
Автор: Ray Garraty на 12:08 AM