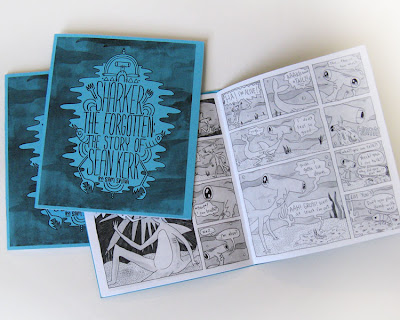 This small comics book is a science fiction story about a man who turned into a shark. The beginning of the book is in the spirit of stories about monsters and wrong turns with pulp element: a man named Sean Kerr does not want to go fishing, but at the insistence of his girlfriend after all fitted out boat, and now three of them (the third one is girlfriend's father) has been in a boat sailing in search of a good bite. But the premonitions do not lie to Sean, the storm begins, and the boat is sinking. Girlfriend and her father get out on the beach, but Sean is swallowed by a shark, which strikes of lightning. After having fought for his life in already inside the shark stomach, Sean calms down. When he wakes up, then he discovers that he is alive and can breathe underwater. His companion soon becomes a shrimp, nicknamed Shrimper. Sean also because of the consonance gets his new name - Sharker.
Sharker still does not know who he is, and the time elapsed since the transformation has resulted not in a couple of hours but as much as four years. 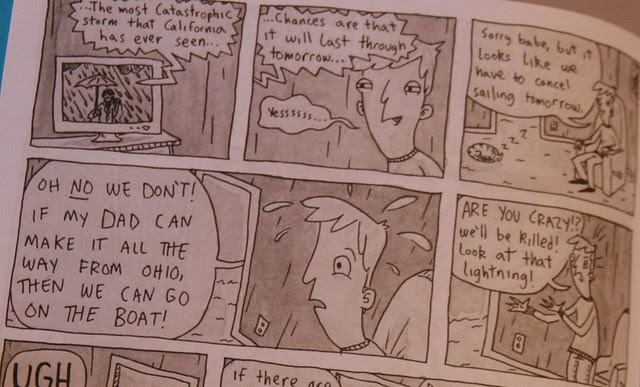 This story at first seems not so original, then delirious, but due to a combination of old school elements of horror and black comedy this comics reads like a homage to good old-fashioned science fiction with non-obvious ending. «Sharker, The Forgotten» is primarily a story of a man ceases to be himself and not knowing what to do now.
Black and white art of Sam Spina organically looks with a story, it turns out, as if watching a series of old black and white tv series. The only thing that seems boring is the addition to Sharker a talking shrimp. The depth of relations between friends in adversity is not observed, the humor of shrimp is flat, so that the shrimp can not be avoided.

Sam Spina has his own voice. It would be interesting to see what he can do in a larger form.
Автор: Ray Garraty на 2:18 AM