If the previous issue of "Stripburger" was a disappointment for me - too many pictures and too little comics - that this, number 54, dedicated to Brazilian authors, is a delight.

In the issue there is an interview with one of the Brazilian artist Marcelo D`Salete. In this interview, D’Salete complains that nobody takes seriously comics in Brazil. Artists do not publish books because there are no comics publishers, readers do not read, because there are no comics and nowhere to learn about them, publishers do not want to hear about comics, making an exception for illustrated books for children. If you like to draw comics and be published - do comics for children. Such a situation recalled the situation in Russia, one to one similar to the Brazilian. If you do comics, just look for the opportunity to be published in the West, at home you could onlu get mockery. D’Salete in an interview remarked that comics in Brazil, made for adult audiences, have social background. His own strip in this issue is one of the strongest stories here. At the heart of D’Salete’s strip is a story about a girl who has lost her mobile phone. On the small number of pages of his work the artist tells us about the social life of Brazil more than we could learn from the Wikipedia articles or from news reports. Unsightly houses, barred windows, open spaces, the dark train, cowboy hats, petty criminals - the author doesn’t focus on this account, the reader himself notes the elements of urban life. D’Salete has lyric black and white art. Alternating panels on people and elements of landscape, the author demonstrates the inextricable link between the inner world of man and the place where he lives. Open ending does not contain harsh sentencing of Brazilian society, leaving hope for the best.

Allan Sieber, also from Brazil, is far less serious. Characters in his strip «Sorry, Olivia» are the couple drawn in the form of cats. The husband has a drinking problem and severe, the wife is tired of suffering. In brutal two-page comic «Car-Boy's Family» by Max Andersson from Sweden children's cruelty finds sometimes bizarre forms and it is aptly portrayed by Andersson. 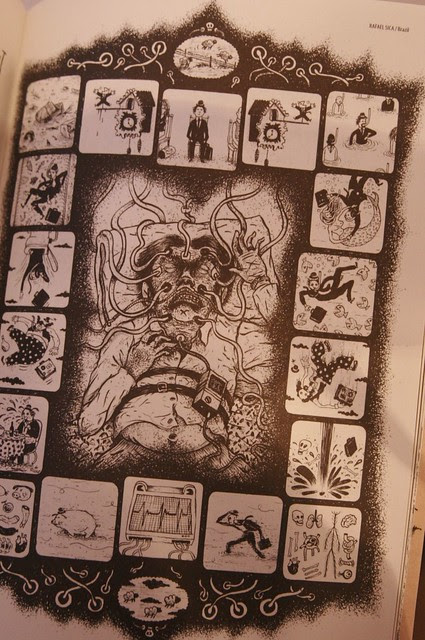 In Rafael Sica’s works there are a lot of marginals. People in his comics are ugly, miserable, and full of despair. Sica often loops narrative in his short strips, thus speakingyou can not escape from your nature. In the comics of Laura Teixeira the time stops. Artist dispenses with plot, but her art is the story. Teixeira catches not a moment, but what happens between moments.

Art of Mateus Acioli in his comic strip «Prick» seems to have originated in North America, but the story is purely Brazilian, with elements of magical realism. Work of Acioli is about a moment, too, that moment almost doesn’t live and then die at once and it is impossible to capture.

It turns out that Brazil is full of excellent comic authors and «Stripburger» has done a great job to convey to the reader the best of Latin American artists.
Автор: Ray Garraty на 2:09 PM