Meanwhile, Between Two Eternities of Darkness 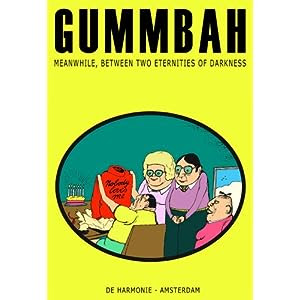 I should start with the fact that it is insanely funny book. You may not be a fan of comics, but if you are a connoisseur of good jokes, this Gummbah’s book will become a pleasure for long couple of hundred pages. On every page here there are two panels more often, and not funny ones among them can be counted on the fingers of one hand.
However, after this it is worth noting another fact - humor here is very politically incorrect, sometimes openly rude, and more - all the jokes are very strict.

Everything is under attack: unsuccessful writers and pedophiles, homosexuals, and dildos, religion and sex. It can only be confusing at first, until you start to delve into the image of the world created by the author. Despite the fact that all the panels are completed on its own, however, each of them belongs to the same world. People in it are ugly and not attractive. There are no children (nominally there are children, but they are all drawn in the form of adults). They just do nothing but fuck, laugh at other people's shortcomings, insult each other, go to the doctor, rape animals. Gummbah, however, created the world that does not look real: seemingly so, almost everywhere it is drawn: families, conversations between friends, picnics, trips by transport, in general, everything that is natural, what people are and do all the time but you feel that it is rather dark fantasy, not in vain here often appear gnomes (from the comics Smurfs), Mickey Mouse, Donald Duck. By introducing these characters into the narrative, Gummbah, firstly, shows the grotesqueness of the world: even where there is no Mickey Mouse there, we see that the world upon Gummbah exists under other laws. Secondly, Smurfs and Mickey Mouse show that the author sees a connection between his own work and the European and American comics. 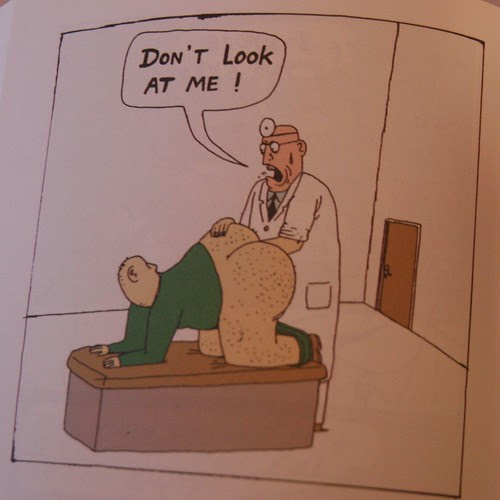 Gummbah’s art is grotesque – grotesque-realistic: the artist often draws in color, but sometimes there are black and white panels, and sometimes the author has resorted to a collage, which is funny too, but they drop out of the aligned series of characters. Focusing on people and relationships between them, the artist neglected backs, often drawing the characters on a background of bare walls or solid color fills. It is difficult to attribute to the flaws, still Gummbah does not aim at full representation of the world, he is just joking.