John Hiсklenton completed this book the day before his death. He suffered from multiple sclerosis and ended his life in hospital. His last book is devoted to nothing else like death.

«100 Months» is more an art album, rather than comics. Death is a stop and not a move, so here the action is reduced to the minimum limit. The book is structured so that one page has one panel. Most often, on a page there is just Mara, the protagonist of the book, she's death, Armageddon, and all the rest of the space, the so-called backs, left white. This allows to focus more on the main character, besides the white space is emptiness, that surrounds the death, and that emptiness, perhaps, is death itself.

In the book there is very limited number of persons: Mara herself, the Priest, and the Pig. Mara, going to the last battle with the Pig, on his way met the inhabitants of this world, created by Hicklenton, but they are only outlines, shadows, copulating animals, which you do not care about – and Mara does not feel sorry for them. Mara is alone in this world; she does not know anybody, and who wants to know death, who can know death? 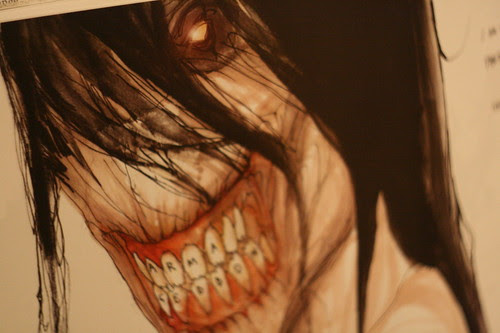 The world of «100 Months» is a pagan world. Mara has a purpose that she must meet, the murder of the god in the guise of a giant pig, to save the world, you need to sacrifice an animal.

This seemingly unhurried book is not created for meditation. There is a dound that you will be able to meditate when you see a mountain of skulls, trails and bridges made from the bones, and piles of corpses of creatures. But you can admire art of Hicklenton indefinitely. His death has not a woman's face but the face of death, often invisible behind the hair. Its red color is mesmerizing. In the scenes of battles Hicklenton sprays tiny droplets of blood on the page so that you inevitably checks is it not your own blood on book pages, so much it's real.