What happened in the previous four parts of the 1-800-MICE comics or how all the books plots intersect, we can only guess. I have not read the previous parts, so I will consider this comic as a standalone product.

This thin book, drawn in minimalist style, is a strange one. The overall story is divided into four subplots, each of which complements the picture of the world, created by Thurber, but they do not intersect. In the first, the protagonist is a policeman, suddenly feeling that inside him lives the second "I", a mouse, in the second cat in the guise of a man uses a variety of modern gadgets. In the third storyline, we see how the mouse escapes from the chase, and in the fourth before us presents a meeting with the mayor of a town. Thurber in this book continues the story lines of previous books, but the gusto in this fifth book - the individual scenes. Here's the policeman, who are already depicted as human-mouse (though it's not obvious at first viewing), goes to the café and he feels like a mouse inside him wakes up and he runs out into the street. Here is humanoid cat in the hat watching little fairy ass through magnifying glass.

Here's a mouse sees torture and pukes. Here's a horse asks the mayor at a meeting.
The author has a sense of the episode. In the chase scene, when a fleeing by hydro-power car mouse run from some thugs, Thurber divides page not on the usual rectangle panels, but cuts the page at acute angles, reducing the size of the panel, thereby transmitting the dynamics of the scene, and inside the panel accommodates only fragments: a hand, gas pedal, the exhaust machine - achieved through that style a fragmentary sense of danger that threatens the mouse. And then on the next page the author is already doing a close-up, posting only one panel on a page. Such a sharp contrast stops you, as if pushing the airbag from the previous scene. 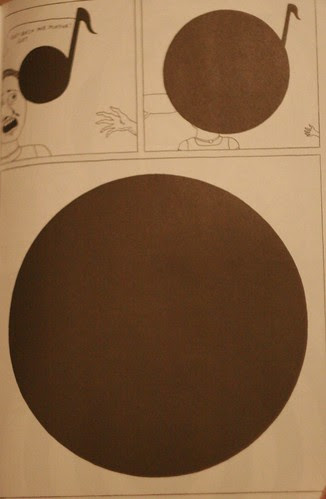 Another incredibly imaginative scene is meeting of people and the mayor when the musical note that escaped from a tree-woman absorbs a mayor. At the three-panel page, we see how gradually the note closes frightened mayor, and then it remains only a black ball.

The world of "1-800-MICE” is an uncontrolled fantasy where you never know who you really are, where you're defenseless, where with the presence of nominal power and authority, power plays no role. It is the world of a mouse, which has only one rule: Run.

Hopefully, this and previous 1-800-MICE books will soon be collected under one cover. It's worth it.
Автор: Ray Garraty на 9:42 PM