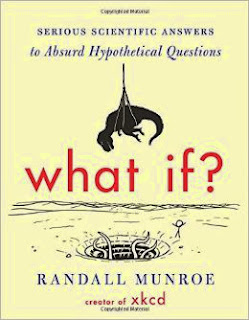 Randall Munroe
What If?

Randall Munroe is the creator of the popular web comic xkcd, and a physicist with a degree, who once worked in NASA. I've never read his comics, and in general would never have guessed that Munroe the comics writer and Munroe the author of this book is the same person, if not the press release from the publisher.

Munroe writes quite unpretentious comics, we can say even amateur, and this simplicity is in many ways very suitable format for this book. Munroe the artist helps Munroe the physicist to illustrate the text blocks. Moreover, some fragments are generally similar to the graphic novel.

Munroe not out of the blue has written this non-fiction. He has for more than a year on his website received weird questions from readers and wrote detailed, reasoned answers to them. Weirdest and even worrying questions (like "How many nuclear missiles would have to be launched at the United States to turn it into a complete wasteland?") have gone unanswered, whether because to the fact that they are weird, or because Munroe could not answer to them, but they are included in the book in separate units, often with a humorous response in the comic form.

The questions that deserve an answer got the most detailed answers with calculations, proofs, experiments and sometimes help from scientists from the respective areas. At first glance, the questions themselves seem silly and unworthy of response. I’ll list some questions:

- What would happen if you tried to hit a baseball pitched at 90 percent the speed of light?
- If every person on Earth aimed a laser pointer at the Moon at the same time, would it change color?
- What would happen if everyone on Earth stood as close to each other as they could and jumped, everyone landing on the ground at the same instant?
- In the movie 300 they shoot arrows up into the sky and they seemingly blot out the sun. Is this possible, and how many arrows would it take?

Perhaps, any physicist with proper training can answer these questions,. The problem is that you will not find a solution in a textbook, and you will need to apply your erudition and imagination, to advance even a little closer to the answer.

Since the questions are usually from people who are far from physics, Munroe first sets out the conditions of the problem, and only then begins to consistently solve it. In some questions, you just need to strictly follow the logic, and the answer will come by itself, and in some cases you need to apply some erudition, as there isn’t the only correct answer. The questions themselves are asked by curious people and even geeks, and the book seems to be written just for geeks from science. This does not negate the fact that approximately 90 percent of questions and answers are written in a completely accessible way and will be understood by everyone, from children to senior people. Even if some formulas cause confusion, they can be compensated by pictures.

Not all questions are from the physics. There is a question on mathematics, logic, there are questions from mixed areas. It is important that any of them Munroe treats seriously. That means that the answer to the question will rely on scientific calculations, research, logical assumptions. At the same time, the author is not afraid to joke and even, where possible, jokes heavily, don’t forget that What If? is written for geeks, without humor any geek quickly will be tired.

Well, the most interesting questions are those where Munro in his answers dives into improvisation. The author deliberately think up additional conditions to the problem, expanding his answer, offers the alternative solutions. For example, the question about Lego "How many Lego bricks would it take to build a bridge capable of carrying traffic from London to New York? Have that many Lego bricks been manufactured?". The author obviously enjoys the answer. Initially, he comes up with a floating version of the bridge, then, as a protection against storms, makes the bridge more durable and stable, and then offers a bridge, resting on the sea ground, and finally calculates the cost of the bridge.

In conclusion, Munroe gives an unexpected alternative: why build a bridge when it is possible even for part of the cost to buy the entire real estate in London and ships it to New York?

It is difficult to say whether it is possible to grow wiser after reading this book. It is sure that strange questions start to appear in you head and you want to ask Munroe to answer them.