The Golem of Hollywood 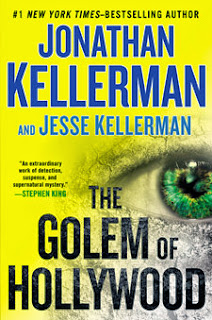 LAPD Detective Jacob Lev wakes up after a rough night in his apartment with a woman he sees for the first time. She calls herself Mai, goes to take a shower, and then mysteriously disappears. The same day, on Jacob’s doorstep appear two men in suits, Paul and Mel, from the Special Projects department and tell Jacob that he is temporarily transferred to their department, to help with the investigation of a murder. For some time before these events, Jacob, after seven years in homicide, asks his boss to transfer him to a desk job due to depression, and the boss moves Lev to Traffic to work with statistics.

«For most of his adult life, he’d been a high-functioning alcoholic, although sometimes functioning was the operative word, and sometimes it was high. Since his transfer to Traffic, he hadn’t been drinking as much—he hadn’t needed to—and it bothered him that he’d blacked out last night.
Now that he was back in Homicide, he supposed he was entitled.»

Paul and Mel bring Lev to a house in one of the remote areas of Los Angeles. There have been found severed head of a man, a package with vomit and a few words in Hebrew carved in the table’s wood. Woman detective of Indian origin Divya Das at the crime scene explains to Jacob the situation. The body has not been found at the site, there are no signs of a struggle, too, and no other clues. Head of Special Projects (which Jacob has never heard of) Mallick says that Jacob is in charge of the the murder investigation because of his Jewish origin.

After an unsuccessful previous novel Jesse Kellerman, this time in tandem with his more famous father, shoots the bull's eye. The Golem of Hollywood’s genre can be defined as a Jewish novel about a serial killer, but it is better not to define it in any way. It does not fit in any genre framework, although composed of the elements of police procedural, serial killer novel and Biblical apocrypha. A good novel about a serial killer is very hard to write, it is very few people who can do it. The very definition of a serial killer novel has become clichéd. Kellerman Jr. until this book avoided genre conventions, while Kellerman Sr. did quite the opposite – he wrote quite a lot of genre books, unashamedly put them in series, where the number of volumes surpasses two dozens, perhaps. And reading this novel, you guess all the time what parts elements of the book the son wrote, and what the father. I have read, only one Jonathan’s book, but all but one of Jesse’s, so I will not be a good judge, though to me this novel’s style was very Kellerman Jr.-ish. Here we have Jesse’s witty dialogues and his nimble prose. The protagonist Lev here is also the heir to protagonists of Jesse’s previous books, he’s again a strange loner, confused and sometimes funny. Jesse’s father apparently came up with a serial killer plot, police procedural parts and Jewish topic, and theme of fathers and sons was close to both Kellermans.

Main plotline, the police investigation itself, is very intense and very reliable as far as possible considering the supernatural elements. The novel is written in the tradition of Michael Connelly, who also wrote (and writes) deep police procedurals set in Los Angeles. Detective Jacob Lev can be a geek or a daddy's boy, a man with complexes or an alcoholic, but he knows his business. All answers here are not taken from the air, only hard work brings results. Leo uses his head and his legs.

The plot is complicated to the extent. It is not simple, but the simplicity only harms books as this one. And if the novel didn’t have the Jewish line, the novel would already be outstanding. Jewish storyline, apocryphal, is mystical and pretty confusing, not everyone will understand it fully. It helps to understand the events taking place in the present, helping to find answers, but does not give clear answers. As a non-religious person, I was lost in the twists and turns of the Jewish line, and not only lost, but did not understand it.

And this lack of understanding is the understanding itself - understanding of the novel as a whole. «The Golem of Hollywood» deserves comparison with the two other novels, written by Russian writers. These novels are Master and Margarita by Bulgakov and Faculty of unnecessary things by Yuri Dombrowski. In both of these books the main plot line takes place in the present, but there is also a secondary line - the Biblical one. In these books, I did not fully understand the biblical line, but that did not stop to highly praise the contemporary line. The same situation is also with this book: the main line is so good that you can judge the novel considering only this modern part. (However, it is worth noting that the endings in both Master and Faculty are more powerful than "Golem"’s, although I do not think that stylistically Kellerman is weaker than Bulgakov and Dombrowski.) Biblical line gives the depth to the main line, and the entire book makes it something than was never written before.

In this novel, Jesse Kellerman first stepped on the genre territory, but all signs of the genre have been turned on its head. Superb.