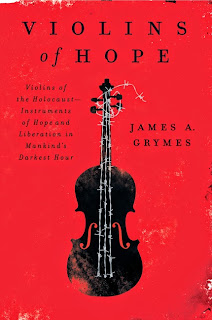 The history of the Holocaust in violins - you can describe the contents of this book with this sentence. In six chapters (with a prologue and epilogue) Grymes tells the stories of six violins, and, most importantly, their owners in the days when the Nazis came to power, and during the Second World War. Link between these stories is a violin collector, Amnon Weinstein, who originally made violins and became engaged in their repair, and then went over to collecting them. He created a program in the memory of the victims of the Holocaust called Violins of Hope.

All violins, which will be in the center of the book stories, were in his collection, he also later began collecting stories about these violins. Amnon’s parents in time fled Nazi Germany and escaped to Palestine. Amnon’s father Moshe was a violinist, repair master and music teacher. In Palestine, it was difficult to make a living playing music and giving musical lessons, and Moshe went into commerce, thinking that that thousands of Jews would flock to Palestine with their instruments, and it would be a profitable business, to repair violins.

He gave gis craft to his son, who carefully preserved hundreds of violins that waited for their owners, or at least relatives of the deceased owners.

Grymes starts the history of violins in Nazi Germany from the beginning of the thirties.

Violins of Hope is one of those non-fiction books about people that does not pretend to be fiction. Stories told here speak for themselves, in any language and need no preening. Author Grymes is concise and academically calm. All that happened happened, history has shown what’s what, all sides are known, and there is no need to put pressure on the reader with pity or preaching.

This book is especially good in that: you soak in the will to live, and the author does not even cries till the sore throat to achieve that the whole story come down to us. Grymes has a clean style, and the book even has footnotes.

Musical instruments from the book’s title are only mediums, not violins for the sake of violins. This book is about people, not about violins or music, unless it’s the music of pain and suffering. Violins saved lives and helped to survive and overcome the difficulties almost non-human. At the same time the violin is an an occasion to tell the stories of people, almost all of whom were not even professionals. The whole project "Violins of Hope" allows you to look at the Holocaust at unexpected angles.

The choice of characters in the book, probably, was not accidental. The author would like to give the widest range of victims of the Holocaust, and it worked. Grymes, of course, could not ignore the largest concentration camps with their orcestras, which are known to the public now, and at the same time, Auschwitz and Birkenau are given only one chapter. This is surprising, of course.
Grymes made a large geographic sample, this is another advantage of the book. Here are an almost unknown refugee camp in Mauritius, and the atrocities of the Romanians, and Ukrainian partisans, and Nazism in Norway. As they say, all the facets of fascism.

Grymes easily controls the general historical information. The book is rich in a variety of facts. In Germany during the war there were chemical plants, which produced condoms for the army, and they were called "Sanitary Articles." In Palestine, the Arab uprisings put pressure on the British government as to limit visas for Jews. Those Arabs even blew a ship with refugees, fortunately, the number of deaths was minimal. By the end of the war the heads of the concentration camps almost lost their minds and asked to play the "Internationale."

In addition to these small facts, Grymes is generous with the historical background. Each story is accompanied by a briskly written historical information about the country, a concentration camp atrocities of the Nazis and their allies - so the book becomes a treasure trove of information. In a concise and accessible way, we obtain all the necessary information, which helps to better understand the history of a hero.

The book became a pleasant surprise. Subtle, clear, on the point - and touching, of course.