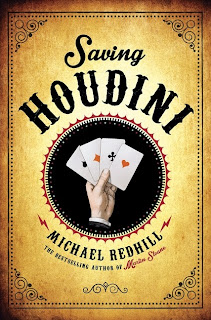 12-year-old Canadian Dashiel (Dash) Woolf with his parents goes to a special magical performance by Bloom the Beguiler, a special show to mark the 85th anniversary of the death of Harry Houdini. Terrified Dash is suddenly chosen by the magician to take part in the trick with the disappearance, and the boy can not refuse.

Dash gets into a special steel circle around him, the trick begins - and Dash is suddenly transported through time. The boy finds himself in the same circus hall, only with empty tribunes and the owner of the club which does not understand where the damn boy appeared from.

Dash examines the streets of Toronto, everything to him seems wonderful, yet he does not recognize his own city. In turn, Dash’s clothing and hairstyle seem strange to others. The saleswoman feeds him for free (nobody accept Dash’s new coins), barber offers him a free cut. Dash agrees to get rid of the eye-catching hairdo. There, in the barber shop, Dash accidentally meets with a boy of his age, Walter Gibson. Walter first bullies Dash, then tries to get rid of him. Dash comes to Walter’s house, pretending to be a friend of Walt and does not refuse to have breakfast with the family. Dash tells Walter that he has come from the future to 1926, and although Walter does not believe him at first, the seed of doubt settles somewhere in his head.

YA novels and SF about time travel is not something that mutually exclusive, more like the secret enemies. This subgenre of science fiction is pretty battered so that it is hard to come up with something original. YA books often require clarity and simplicity, and mix it with the time travel SF, and we will get only completely banality - simplicity, multiplied by the obviousness.
Author of historical novels Redhill is not trying to reinvent the wheel, or rather a time machine, just follow the rules and formulas. Result is if not spectacular, but well above the average. Saving Houdini uses SF as a genre as a plot device. Redhill needs to place his teenage hero to the past, familiar to Redhill surroundings, and at the same time to create a conflict. Thus with the the disappearance trick Redhill kills two birds with one stone. Canada of the Twenties gives the author a chance to write what he knows, and moving into the past becomes an occasion for protagonist to travel around.

Redhill does not abuse his knowledge of history. In the novel, the amount of so-called infodumping is kept to a minimum. The author focuses on the mission of the protagonist, not on the small historical references. There are enough of light touches, so Toronto appeares before our eyes as real.

At the beginning of the novel, when Dash only surfaces in the past, Redhill plays on the dichotomy of past and present. Clothing, hair, money, speech of Dash differ from these same things in the past. Redhill is seeking, for example, the comic element, when Dash uses youth or internet slang to talk with Walter, who, not understanding simple things, asks explanation. Or in the second half of the book Dash gives advise to Walter to collect comic books or cards with baseball players, then to make a fortune on them.

This method has a limited effect, and Redhill, knowing that you should not rely solely on verbal humor, almost gives it up in the second half of the novel. But even without slang you can find lots of interesting things there. Wild trip by train, the pursuit from police and social services, assistance in setting tricks, rich dialogues with Houdini - with all the ease of writing and predictable plot the book will top dozens of thrillers for adults.

Houdini's image in the novel deserves a separate discussion. The famous magician in the book is a good man, trusting, thoughtful, brave, easy with children. This is a bit naive portrait, of course, but Houdini seems sympathetic to the reader. He is such a superhero of an old era, when there was no Superman or Captain America.

The novel is highly recommended not only for children but also for adults.