Prayers for the Stolen 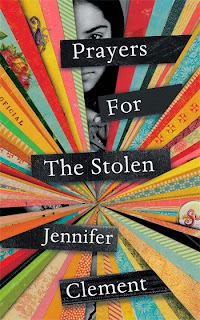 Jennifer Clement
Prayers for the Stolen

Protagonist, a girl named Ladydi Garcia Martínez, lives with her mother in a remote Mexican village of Guerrero in the jungle. Being a young girl in Mexico is not easy: learning about the existence of a beautiful girl, drug traffickers immediately want to kidnap her. That's why the girls' mothers make their daughters ugly, making them boy’s haircuts, putting them into second-hand clothes, banning cosmetics, and not letting anyone anywhere. In case, if the village hears the sounds of approaching traffickers’ jeeps, mothers immediately hide their daughters in a specially dug for such cases hole in the yard. These holes are in every yard.

Women in general have a harder time, especially in the absence of men. There are hardly any men in the village. A lot of men work in big cities, and those who are more gifted and more trickier leave for the United States to work there as gardeners or handymen. So it happened with Ladydi’s father, who initially worked as a bartender at a hotel in Acapulco, then moved to work in the United States, from there at first sent money to the family, and then suddenly stopped. Ladydi always loved her father, but the last time she saw him, the image of the perfect dad had been destroyed by her mother.

Ladydi’s mother, already drunk, told her daughter that her father slept with half the female population of the village. Moreover, Maria, one of Ladydi’s girldriends, is an illegitimate daughter of Ladydi’s father.

It’s hard to believe, but this seemingly full of violence story is rather funny thing. This effect is achieved due to the voice of the narrator Ladydi. Girl’s humor is a way to protect herself against the cruel world which she lives in. Ladydi that never in her life left her village and rarely went out even to the highway begins to understand the unknown world. Familiar world of school, sitting in the holes, drunken mother monologues suddenly changes. The narrator, despite the seeming naivety, is actually not dumb and quite familiar with the state of affairs in her native country. But Clement uses the literary device of keeping back, that’s why we think that we have to deal with a village idiot. Due to this, the story has a humorous tone. But the humor here is of black type, but definitely bitter. Clement through the narrator translates her vision of contemporary Mexico, which is laugh or cry.

«I only went to school until the end of primary. I was a boy most of that time. Our school was a little room down the hill. Some years teachers never showed up because they were scared to come to this part of the country. My mother said that any teacher who wanted to come here must be a drug trafficker or an idiot.»

The author uses in her novel the device of overlaying a parable and realism. All the events described are based on reality. Young girls are really abducted, hundreds a year, and many of them do not come back home. Cartels and drug traffickers are terrorizing the country where everyone is afraid. Corruption flourishes. Prisons there are not set up differently as, say, in the U.S. or Russia. But a way of telling of the story is parable. That girl is kidnapped by drug lords, that actually exist in reality, but in the story drug lords are not quite drug lords, but rather evil beings like dragons in fairy tales, abducting young girls, too. Or three servants who continue to live in an empty owner's house, when they learn of the death of the family. In Mexico, there are a lot of abandoned houses, but in the novel it looks again like a fairy tale: a girl crawles into the house of three bears and starts living there. The novel has a two-layer structure: the parable seems to blunt overall violent background, but the author never lets us forget that everything that happens happens in reality, it's not a fairy tale.

In addition to an incredibly real voice of the protagonist Ladydi, Clement created a lot of complex secondary characters. There is no unimportant characters: each has its own story, to the smallest detail real and often poignant. Clement loves her characters.

The novel’s plot is almost perfect: against a one person story we read about system of the whole country. The heroine goes through three stages: village, town and prison - and each of them exciting, and each of us will learn something new about the country and the protagonist.

Most of the characters in the book are girls and women, and it is certainly very feminine novel, but it's hard to imagine a man who would not be touched by the story - you have to be either a fool or cruel-hearted.

It will not be an exaggeration if I say that Prayers for the Stolen is the best novel about Mexico that I have ever read, better than Don Winslow’s Savages and certainly better than Lang’s Angel Baby. Extraordinary.