The Wind is not a River 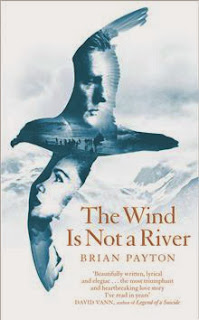 Brian Payton
The Wind is not a River

Journalist John Easley with a team of six people crashes in the Aleutian Islands near Alaska. Easley on a parachute lands on one of the islands, becoming the only survivor from the team. After recovering from the fall, Easley helps to get out of the water to another survivor, an aviator with another vessel.

They do not know whether this island inhabited or not, but in case of the Japanese soldiers stationed here, Easley and an aviator find shelter in a small cave, make a fire and dry aviator’s clothes. Aviator, twenty year old guy from Texas named Karl is younger than Easley for fifteen years, and despite his rank, he is less experienced in surviving in the cold and lack of food.

Karl says to Easley that he should not even been on a plane, and that is so. Easley’s younger brother, Warren, died in the English Channel. Brother's death spurred Easley to cover the war. Writer and journalist, known for articles about nature, Easley wants to illuminate obscure corners where the war is on, too. In 1942, the Japanese occupied two islands that are part of the Aleutians, and American troops in turn occupied the rest. This is the only section of the front where the war is going on in the United States territory as the Aleutians is a part of Alaska. All reports are prohibited from there, the information is encrypted carefully, and all the journalists were forcibly deported from there. Among them was Easley, at the time working with local people, Aleuts, many of whom are Russian descendants. Easley nevertheless did not want to leave alone his story of the Aleutian Islands and planned to return there illegally. He forged the documents, taking the name of his brother, used his brother’s uniform. Returning to the island turned out not quite so, as Easley imagined it.

The novel is based on factual material but that does not make it less artistic. Occupation of two islands belonging to the United States during World War II slipped between the pages of history books. But Payton is not limited to the expansion of our horizons. Selected historical period and place of action are the best backdrop for an exciting story. Payton doesn’t expose, a newspaper article would be enough for that, and but makes what, in general, an writer should do - showing something secret, such that we can not see in real life.

From the first page the book captures us, throwing the protagonist in the thick of things. Eventness gradually reduces, or rather the external eventness reduces but internal one rises. Gradually, the author talks about the history and inhabitants of the Aleutians, expands the main character’s past, stopping on his relationship with his brother and wife. And while the younger brother was cuter, funnier, more active than the older brother that was annoying to Easley, Easley all his life experienced some guilt to his brother, from the childhood, when he almost lost his brother at the station.

Leaving the protagonist almost on an almost uninhabited island, Payton could thus commit suicide. A lone hero in inaction could not pull the novel, lost in the monotonous depression or drowned in the past. However, Payton finds expressive means for loneliness. There are enough of hallucinations and survival skills to kill two birds with one stone - metaphysics and the law of the jungle, here should be called the law of wasteland.

Leaving his journalist protagonist, the author uses the metaphor of silence. The task of a journalist is to cover the events, tell the truth, and the protagonist wanted that coverage. But on the occupied island Easley has no one to tell, on the contrary, he should be silent, not to betray his presence to the enemies.

The storyline about Easley’s wife, Helen, could become a burden to the main plotline, if it were not that much interesting. All attempts to find a husband can be compared to what at the time Easley himself experienced. Civilian life is easy - the novel dispels this myth. Live in ignorance is physically difficult, not less difficult to search for your love ones. Helen also survives, but in a different environment and with other methods. When she gets in the entertainment group, she still struggles because she grew up without a mother. She didn’t know a maternal warmth, grew up without women's advices, even about her periods she learned from an elderly doctor.

Brian Payton excelled at all levels: he knows the history, knows how to build a story, elegantly switches between the main characters, has style, has an eye for detail.