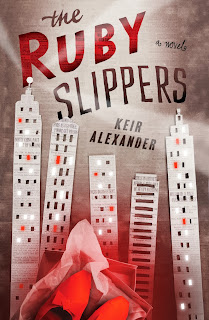 The old woman Rosa, accompanied by her dog, trudges through the streets of New York City on St. Patrick's Day. After taking grocery products from her only relative - her nephew Michael Marcinkus, the owner of a grocery store - Rosa drags on until an accident happens. Miraculously surviving it, Ross is brought to the hospital, where she stays in a coma. The nephew who thinks that his aunt can die at any moment is notified, and with his wife he goes to inspect Rosa’s apartment.

Rosa in recent years almost lost her mind, did not talk, just wrote her name on the paper asking for products, and suffered from that she did not throw anything away. That is, in general, from fish tails to worn stockings. Michael and his wife at first are horrified, seeing the situation inside the apartment. Mostly sickening smell of putrefaction and decomposition discourages them from entering. And when he comes for the second time to sort through things, he finds among the heaps of garbage stored in a box ruby slippers. These shoes are not just another junk but iconic relic. In these shoes Judy Garland played a role in the movie “The Wizard of Oz”.

Michael is dumbfounded by his find ( which has a letter attached). Shoes certainly are worth millions, but Rosa is not dead yet, and for her this pair of shoes is probably the most precious thing, the memory of Hollywood past.

Alexander in her novel weaves intrigue around a pair of shoes, but the storyline is clogged with cliches and coincidences. Secondary plotline - about the relationship of father and daughter, James and Siobhan - is of greater interest, but remains in the undeveloped state.

Leaving a family because of an opened homosexuality is a vast topic, giving an opportunity to understand the motives and hidden sexuality and to see the reaction of society, and suggest that a victim of the effects of a broken home can become not only a child but also the parents. Alexander approaches the topic with uncertainity. Position of the families of lovers Paolo and James is too banal (James’ father is angry at the sight of his son, calls him faggot and we don’t see Paolo’s at all), the history of relations between Paolo and James is also unknown to us. James, for all his goodness, thinks more about the deceased lover, but not about a living daughter, who sorely misses not only the father but also the truth about him. The seven-year separation is not easy to restore to their former relationship, but here the conflict has strikingly been simple solved already after a couple of meetings between James and Siobhan.

So vast theme with inexhaustible resource has shrunk in size to a happy ending, the author is more interested in a game of cat and mouse with the slippers. Suppose Rosa was really a dresser of a famous actress. And she really left the shoes as a memory. But why has Rosa become crazy? Why her nephew did not support her all this time? Gave her food, but could not come to visit and talk? Couldn’t hire someone from the social services? Why Rosa lost her speech, but did not lose her ability to write? Rosa’a story, her move to the States, life in the Baltic States, is not that is banal, but something like that we have read many times. But too much does not fit with Rosa, to be able to understand her and Michael.

The other characters are drawn to the slippers by chance. For James Garland is a gay icon, and he wants to have something that belonged to her. Not too convincing. Or James is gay only because in this case he could be interested in the auction? The black boy also just accidentally overhears Michael and his wife. Harrison is still not a member of a youth gang to blackmail Michael and even commit robbery in broad daylight. And the reason for blackmail is frankly labored.

Thus, a large part of the plot rests on coincidences. Motives for almost all the characters are too far from reality. It is not enough to weave fates, it is necessary that these fates were supported by at least some credibility.