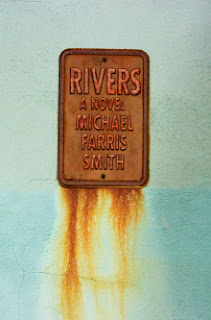 Destructive wind and rain made life impossible in the American Southeast. Incessant rains and hurricanes destroyed and eroded all the Gulf Coast, and people were forced to flee to the north. Government after fruitless struggle for the preservation of life in the Gulf Coast surrendered and announced the full evacuation. All the inhabitants of several southern states were invited to sell their property, collect everything they need and move. The government has drawn The Line separating the flooded states from the rest of the territory. Life below The Line is considered outlaw. Those who choose to remain in the eternal rains and hurricanes territory would lose any help from the state. Life below The Line is permitted at one’s own risk.

Nevertheless, not everyone left the coast, torn by hurricanes. The protagonist of the novel Cohen, a middle-aged man, lives as a hermit in his house, in the company of a horse and a dog. Cohen continually patches his home, even trying to build additional facilities. He promised spacious house to his wife and now keeps his word. Cohen's wife Elisa and their unborn child died during a mandatory evacuation. Now Cohen sees no reason to leave the house, where he expected to spend the rest of life with his beloved wife and children. Cohen has been left only with sorrow and some personal belongings of his wife.

When Cohen once again returnes from the place where he buys fuel for the generator, water, food and ammunition, he meets on the road a pair of young man and a woman. After some consideration, he agrees to drive them a short distance. In the car, the travelers attack him, throwhim out of the jeep, but do not kill him, but taking the jeep and with it a gun and provisions. With dislocated shoulder Cohen barely reaches his home. Looters already visited the place. They took almost everything that can be useful, but Cohen determines that they will still come back, at least for the generator. Among the things missing are even shoebox where Cohen kept his wife’s things.

In short summary Rivers may seem formulaic SF novel, but this is only partly true. The book stands on already acquainted and traversed, on developed soil, but it is completely self-sufficient
work. Smith has his own vision of post-apocalyptic world. This is not getting back to the Middle Ages where people ride on horses and fight with swords, butalso not techno\cyberworld where wild gang ride supercars accompanied by robots. Rather, the world according to Smith can be characterized with almost blues words: a place where everybody fell bad. Or in another way: it is a place where almost no one lives.

Smith developed the variant of a future where a hurricane like Katrina would become commonplace. But the author is not as much interested in world order, as in a story and people, what happens to people in the course of a story.

Since the action of the novel takes place in the U.S. South, the novel has a few special features of the genre called Americana. Here are working hands protagonist and a Creole girl and almighty force of a shotgun and empty spaces and hot tempers. Southerners still distinguishes by obstinacy and perseverance. Probably more so Cohen remained in the flooded area – in spote of fate, feeling some kind of duty to his native land and the graves of relatives.

Beginning of the novel and about the first third is a very good noir, where the hunted becomes the hunter. Cohen is an owner: he keeps an eye on the state of the house, keeps animals, it’s hard for him to part with things. So, appearing in the trailer camp, he insistently repeated one question: where's my things?

Brokedown protagonist makes him interesting and attractive to the reader. He is hard, but sentimental, no stranger to violence, but not a killer. The author manages to make us even love Mariposa and Evan, despite their heinous act in the beginning of the novel.

Rivers, however, is not just a story of revenge. The remaining two thirds of the book is a quest for meaning and rescue, and where this quest will lead, we can only guess. Smith is definitely a top-notch plotter.

Despite the abundance of shooting and car chases in the novel, it is nice that the novel is not sinking to the level of post-apocalyptic thriller. Cohen can handle a shotgun and a car, can survive, but he 's not a superhero, not a machine that can sweep away everyone from its way. No wonder women prisoners in the camp saw in Cohen a savior.

Smith skillfully adapts the characters' psychology to the world. The scene in the café is revealing when a small boy, who does not know life before flooding, does not understand what a waitress do collecting orders. He used to get food from the hands of his "master" or gain it from theft and raids.

The end spoils the whole picture, but we can understand the author, too. In the whole, Rivers is an impressive work, bleak, intriguing, full of humanism.