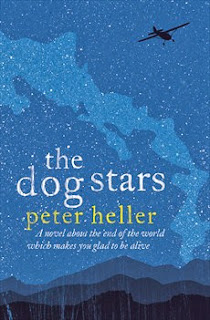 Hig, a pilot and the hero of this novel, lives in an abandoned hangar with his beloved dog Jasper and dangerous companion Bangley. Nine years ago, a fever of unknown origin wiped out almost the entire population of the planet, yet leaving some alive who carry now the disease called just The Blood. After losing to epidemic fever wife Melissa and an unborn child, Hig left the city in Colorado and moved to the hills, where all this time he’s been fighting for survival.

Together with Bangley they equipped the perimeter - a small piece of land, which became their refuge. On their land Hig and Bangley have built an observation tower, have armed to the teeth (for that is responsible mostly Bangley, an ex-SEAL, in his spare time working on his weapon arsenal) and now they defend themselves from time to time wandering on their territory strangers. Hig makes rounds on his old plane “a 1956 Cessna 182, really a beaut”, watching the area from the sky, searching for strangers, as well as game and possible supplies, while Bangley watches the perimeter that at any moment could be invaded by "guests". Jasper serves as a night alarm, sleeping side by side with his master. The dog is old, has been with Hig before the fever, but still not in a bad shape.

Heller, who before this book has written about the adventures and travelings around the globe, debuted with a novel. The author immediately went on the genre territory, namely the post-apocalyptic science fiction, certainly causing with that the displeasure and open envy among SF writers. Because science fiction writers don’t write so well. Some do, of course, but it's a small percentage. Let any publishing house throw «The Dog Stars» to its science fiction imprint, and other novels of this genre will look poor, gray and dull, at least stylistically.

And it is not the fault of SF writers that they write that bad, it is Heller’s fault (or achievement) that he writes that well. In building fantastic entourage he, on the contrary, is not too skilled. The novel’s premise is familiar even to those who have not read fiction at all. Heller does not invent the wheel, just takes those wheels that have already been invented, and just put them on his bike, as it is convenient to him. Heller is not particularly interested to play in virologist: there was an epidemic (big deal!), almost the entire population died out (so what?), someone got infected and become a carrier of a strange plague (who cares?), a global warming started - what now, contrary to logic, to make a hero to get behind the microscope and make him study different science fields at once? In conclusion, the author of the novel makes a few vague allusions to the origin of the disease, by the time that's already not important.

What’s important is, Heller has written a book that reads in one breath, you do not want to close it, you beg the author to tell something else, some small detail from the protagonist’s past. The Dog Stars is the imposition of a skillful adventure about the survival out of civilization on a modernist style with the elements of post-apocalyptic fiction and men’s fiction about the search for love. And it makes no sense to look for where one layer ends and the other begins, as they lapped each other.

Depopulating the planet using a fantastic element, Heller makes a perfect background for his drama - the natural world, where people seem to have already become superfluous, but still clinging to existence. For nine years Hig lived only by relying on a fading memory, and almost extinguished hope. Why does one needs a life if the world around you died? Just for the sake of life itself? Having made his hero a pilot of the aircraft, Heller drew an allegory between Hig and birds, but of that sort that is bad with flying: Hig is attached to his piece of land, which gives him at least some security, and missions only tease his imagination and are part of self-defense. The hero can fly, but can not fly away - no place and no need.

As an extraordinary traveler, Heller with unprecedented skill transfers his knowledge of nature and on a page. It's one thing to conquer the rivers and peaks, and the other to describe it as if you the reader plunge into nature, too. To do this you need experience - even if you're a stylist's number one, sitting on a chair somewhere in a residential area of Chicago, you can’t imagine and can not describe all that so authentically as it does Heller.

If Heller’s spirit is closer to Jack London, the style is closer to the experimental prose. The novel is written as a stream of consciousness, where past and present merge, and mangled vocabulary, poeticized in some places. The storyteller prior to the epidemic wrote prose and poetry, perhaps, hence originates the style of The Dog Stars. Remained essentially without writing (the only example in the book is the scene where Hig writes a warning to farmers), Hig initially focuses on spoken language, which has its own laws.