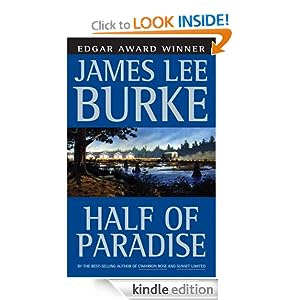 James Lee Burke
Half of Paradise

A part of Forgotten Books Friday

Three young men in Louisiana of early 60s are experiencing the difficulties of life and trying to find their place in life. Avery Broussard returned to his father's farm after work on oil wells. Father soon for debt was evicted, the farm was sold by auction, the father then dies immediately, and Avery instead of agriculture switches to the moonshine whiskey trade.

J.P. Winfield comes from the countryside to the city and spends the last five dollars to participate in the talent competition. A talented blues singer, Winfield gets a job at the club, and then even goes on a tour. Success comes to Winfield with addiction: first pills "for pleasure", and then cocaine under the tongue.

Black Toussaint Boudreaux worked as a longshoreman, moonlighting as a part-time boxer. His last fight ends with a victory, but the price of victory is a broken arm. Injury leads to loss of work (and part-time work), wandering, and then to a prison.

The debut novel by James Lee Burke's written in the not too widespread genre of "hard life of hard men". Hardships and difficulties stick to the three characters of the novel, which brings together youth, lack of education and poverty. Despite the "paradise" title , the novel tells of the circles of hell, whose name is Louisiana. Even when one of the characters starts to climb, do not assure yourself - he will drop even lower than he had been.

All three heroes, definitely clean and decent people, eventually break down. Reasons for this are drugs and alcohol, but these are external causes, the same major weakness of all three characters is their assertiveness. They rush forward not seeing that the abyss is under their feet.

Plot-wise Burke tightly packed in his novel several sub-genres: prose of the South changes to the prison novel, then to out-of-prison novel, and then to the confession of cocaine user. The central part of the novel takes place in prison: in labor camp Broussard and Boudreaux will meet. I can quote prison dialogues for hours:

"This tastes like Evans washed his socks in it," he said.

"Drink it or go dry," the trusty said.

"Maybe you don't get no water the rest of the day," the trusty said.

"And maybe you'll get your fucking throat slit while you're asleep," Billy Jo said.

The trusty put the lid back on the barrel. "That's all your drinking water for today."

"Let me have a drink. I'm like cotton inside, "Daddy Claxton said. ...

"You'll have the runs for a week," Billy Jo said.

"His tongue won't be blistering by one o'clock," the trusty said.

The dipper was passed around the gang. The trusty replaced it and the lid when they had finished.

"There's a freshwater spring over in them trees," he said. "I'm going over directly and have a drink."

"It's coming right out of some rocks."

"Go fill up the water barrel. We'll pay you for it, "he said.

"I got three bucks hid in the barracks."

"The sonofabitch is riding you," Billy Jo said. "Don't pay him no mind."

"It's coming out of some rocks with moss on them. '

"I believe him," Jeffry said. "This is hill country There's always springs where there's hills."

"You're in barracks two, ain't you?" Billy Jo said to the trusty. "Well, I got buddies in there, so you better forget about sleeping for the next few nights unless you want to get operated on. It takes one swipe with a knife and your whoring days are over. Now get the fuck out of here, punk. "

"It's a long day without no water," the trusty said and lifted the barrel and moved down the ditch.

Half of Paradise makes us to remember of what used to be old school prison and novels about them: no gangbangers, no Mexican gangs, no Aryans.

The title of the novel could be interpreted in the sense that for a novel as this you can give a half of paradise.