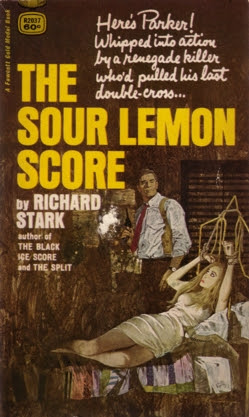 
A part of Forgotten Books Friday


Parker and three accomplices robs the bank and then go to an abandoned farm, where they have to sit out and share the loot. In the house one of the accomplices, George Uhl, kills two others and almost kills Parker, but Parker manages to jump out of the window, however, losing his gun. Hiding in the woods, Parker, unarmed, can only watch as Uhl sets fire to the house and one of the cars, and leaves on the other.

Parker gets to the town, where there was a robbery, asks Claire to wire him money and leaves twon. Parker needs to find the son of a bitch Uhl and pick up the share that belongs to Parker. The search is complicated by the fact that Uhl is relatively new in the game, he was only in for six robberies and no one really knows him or anything about him.

This is a solid Parker novel, at the same time an example of that Parker has mellowed in Gold Medal books. For example, moneyless and gunless Parker does not have to rob and steal: Claire wires him money. He even buys, not steal cars. Or take a truth serum, first used on Parker and then by Parker. What are the chances that Parker would use serum instead of fists? This serum is clearly from the repertoire of Westlake, not Stark. I wil be silent about the finale, when Parker catches Uhl (spoiler, yeah, but this review is written for those who have already read the book).

If you do not pay attention to these "soft spots" then The Sour Lemon Score is quite a solid read. The plot has a few borrowings from the previous books, but it’s not really a shortcoming.

The Sour Lemon Score is often regarded as the best of the four Gold Medal Parkers, but I will name the best The Green Eagle Score, more unexpected and more violent book.