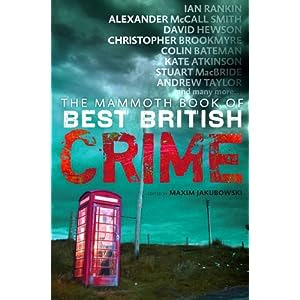 This thick volume includes more than 40 stories. I want to just say "wow!", but is it plus to a book with such a volume, when the title has the word «best»? On the one hand, ut’s a definite plus: the editor Jakubowski read a lot and carefully, selecting stories for publication, from anthologies and print magazines, as well as from online zines and chapbooks. Accordingly, there are masters of the genre, who have a few awards on the shelf, but there are newbies as well who have no published books. The variety is almost always good, but variety does not mean quality. Are all the forty stories the best? Or there are the best, those that are worse, and those one about which people usually say "read and forgot"? Yes, those there are here too. With this number of stories it’s impossible that all the stories were equally good. If the book will be of ten stories, it would be really best of the year, but it turned out the best and a lot of good. Read the best is necessary, 10-15 stories here are good, the rest are for another reader, maybe. I will look at the top ten only (in the order they appear in the book).

«Dolphin Junction» by Mick Herron is definitely one of the best stories in the book. The plot is that a husband finds a note from his wife stating that she was leaving and that he didn’t try to find her. The police treat him calmly: adults converge and diverge, anything can happen, - but the husband feels that his wife was not gone somewhere by herself, but she was kidnapped. He starts to find her. This story has everything that makes a story good story: an unexpected turn, tense plot, secrets of the past, and retribution for them in the present. «Affairs of the Heart» by Kate Atkinson seems at first a humorous story, but the end is dark as in the «Dolphin Junction». Feelings can not be trusted, especially when they associate with a family, where women are called Faith, Patience and Constance.

«And that was why, on a cold night in February, Duncan Milne was up to his neck in shite. Literally. » - thus begins the story of Stuart MacBride «The Ballad of Manky Milne ». And it really reads like a ballad about a loser who got involved in shit in the literal and figurative sense.

«The Circle» by David Hewson is the only story in the collection that develops the theme of terrorism. The author leads the reader by the nose until the very end. In «An Arm and a Leg» Nigel Bird presents to his hero an upbringing class (Bird himself is a teacher), so only punishment will be far more serious than a blow by ruler on the wrist. «Homework» by Phil Lovesey is a story in the form of composition by a girl named Judy Harris. A girl studying in the school "Hamlet" and finds many similarities between Shakespeare and the history of her own family. Children had never yet convicted criminals with such care and knowledge in the literature. («Homework» has won this year's "Dagger" for best short story.)

«Unhappy Endings» by Colin Bateman is a postmodern mystery about the writer. Very funny and very dark. As I hear in Bateman the echoes of John Barth. «Run, Rabbit, Run» by Ray Banks is a simple but catchy tale of cowardice, responsibility and high self-esteem.

«The Hard Sell» by Jay Stringer begins as a screenplay for a heist movie a la Ocean's 11. Resourceful crooks have come up with a good scam, just did not take into account that experience was sometimes more important than youth. The anthology ends, as well as begins with a story of Ian Rankin. «Driven» is an ingenious blend of crime storiy and sermon. Rankin, who has dozens of novels behind, has shown that he is in great shape.

After this collection, you can easily find who in British crime and mystery are worth reading in the first place, and enjoy the finest selection by Jakubowski.
Автор: Ray Garraty на 9:12 PM