Glen Ganges returnes in the second volume of «Ganges». This collection includes two short stories. The first is a computer game. The player himself, though, will not appear, before us only the screen with a strange toy on it (and indeed it is not clear, is there player at all). After the hieroglyphs we see a choice of players, and the hero is someone like a hedgehog, but with long human legs. This hedgehog-man begins to hit other obscure characters. The meaning of this story in general and its inclusion in this collection may well have remained a mystery if it were not for one thing. The thing is that you do not need to look for a meaning there, when you can see what figures Huizenga draws. The figures, which are built from computer characters, are similar to figures of the Aztecs, the structure of a human cell and a key to unraveling the mysteries of the universe, at the same time. You have never been under hypnosis? So Huizenga’s art proficiency hypnotize you, just try it. 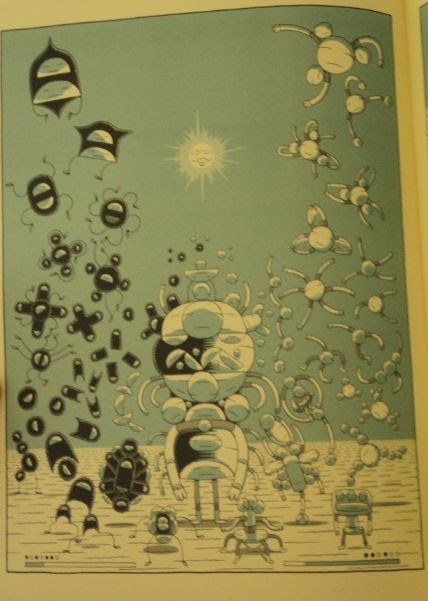 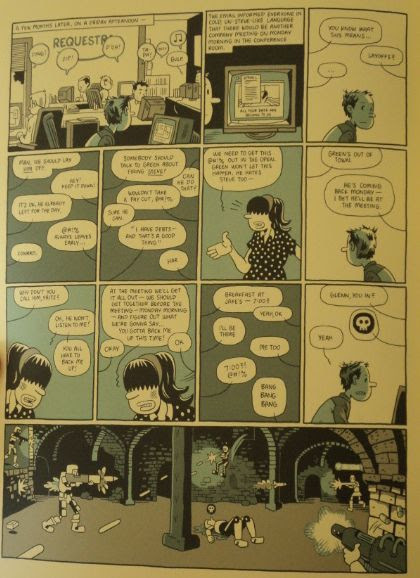 The second story in the book, «Glenn Ganges in Pulverize», is an unexpected continuation of the first one. This computer game is the game that all the office staff, where Ganges works, plays. In the late 90's an Internet start-up begins, something like Yahoo, pre-doomed to failure, and Ganges and his colleagues tried to make money on the internet. And just a whole day (and staying at work past midnight) the entire office was playing a computer game on the network. There were not hedgehog-mans, it was something like a shooter where players only shooting at each other. "Pulverize" gradually began to replace reality for Ganges. About this comic a lot can be said like "our whole life is a game», and this will be true, but more true to saywill be that all good things must come to an end, you’ve played, and that's enough. And the moral is simple: not work joins people together, but fun.
Автор: Ray Garraty на 2:01 AM