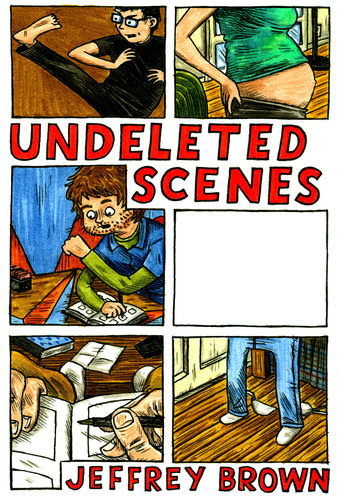 «Deleted scenes» is called the not included in the film his segments, but are available as a bonus on the DVD. Jeffrey Brown, which American critics call indie comics legend and the genius of autobiographical comic books, named his 350-page book of his best works "Undeleted Scenes", very clearly identified the format. It consists entirely of fragments, pieces, which gradually set in a mosaic, although the fragments seem to be of quite different sources. The general is the life of the author. Besides the title refers to the fact that the fragments are not to be disposed of: some of them are the quintessence on two pages of what might have taken at least 50 from the other.

All the scenes are drawn by Brown himself and quite simple: black and white drawings, only the black lines on white. Technology changes a little throughout the book, but not much.
Brown wrote about that takes place in the life of twenty-with-something year old: the memories of childhood, meeting and parting with the girls, comic books, baby birth, work in the shop.

The book is quite funny: Brown the author puts Brown the hero in absurd situations, making fun of himself. Brown succeeds most in long fragments. In «Don` t Look Them In The Eye » lyrical hero becomes a victim of beggars, tricksters, boor shoppers, street madmen due to his naivety. He is fooled, he wonders, thinks, but in the end not much regrets that he is fooled by all those men who wanted to. «Every Girl Is The End Of The World For Me» is a memoir about girls of the protagonist. At Christmas, Brown manages to tighten almost all of his girlfriends at once, and not finding out who suits him more. Brown the author chose an ingenious method to show the inner world of Brown the protagonist: each of his girlfriends is a mirror to the protagonist himself.

What needs to the book, that is the button "Del": some stories could be removed, they look quite clumsy (it’s the title of one of the previous Brown’s books).
It is not always exciting reading, but here as with life: how it had not been sometimes bored, but nothing could help.
Автор: Ray Garraty на 9:08 PM