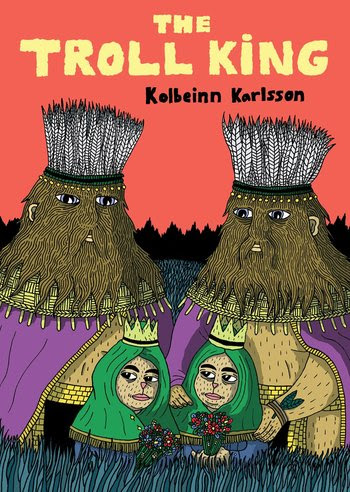 Retelling the plot of this truly insane book is a thankless job, exposing oneself to ridicule. Presumably the trolls (who knows how trolls really look? I do not know. The book has also no indication that it is trolls, the word "troll" is only in the title.) - underfed sumo wrestlers with the strange bags on their heads - live in a wooden house somewhere in the woods; put on a kind of veil, they go to the supermarket for food, cook pasta and smoke cigarettes. They are watched by another child of the forest, hairy hybrid of a bird and a snowman. After performing the rituals around a fire, they burn the scarecrow, get pregnant (though they look like one hundred percent men), through the anus they give birth to a child, which in the morning all the same bird-snowman presents to them. In the second part the picture changes completely, there is a red bearded man, surrounded by monsters that compel him to eat and drink. In the third part a carrot man appeared, and I think I should stop the retelling of this exciting Swedish delirium.

Actually, it is not so delusional as it may seem: the novel, composed of seemingly disparate parts, will complete in accordance with the logic, which may be in this absurd world Kolbeinn Karlsson invented.

Sweden is one of the countries where black metal flourishes, and this book is almost entirely built on what black metal breathes - on paganism. Narrative is so unusual, so engrossed in the natural essence, that would rather believe that the book written by one of the ancient tribes of Sweden, rather than a modern author.
The book is very skillfully written and drawn; in different parts the author changes the style, perfectly matching color.

«The Troll King» is one of the books in Sweden Invasion series. Judging by this novel, the series is worth paying attention.
Will it be a better compliment to say that this book is yet the most powerful graphic work I've read this year?
Автор: Ray Garraty на 10:59 PM