The Sound of Things Falling 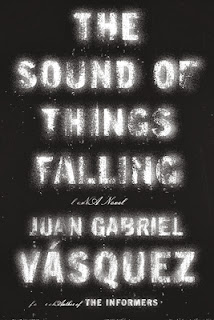 Antonio Yammara, a law lecturer at a university in Bogota, recalls the events of the mid-1990s, when Colombia was torn by cartels, corruption, killings of innocent people. In 1996, Antonio was almost 30, he had just graduated from university and began to teach Law. He lives modestly, occasionally visiting cafes and bars, and in a billiard club he accidentally meets Ricardo Laverde. He is a shady type, with murky past, who is said that he just got out of prison after 20 years – and you don’t get 20 years for a minor offense.

Word for word, and Ricardo and Antonio become close, though Ricardo doesn’t tell much about himself. He only says that he is “a pilot of things that need piloting” and that he has a wife, Elena Fritts, an American, whom he had not seen for 20 years. He is to meet her soon, when she arrives from California.

When the next time the narrator meets Ricardo, the pilot shows Antonio a tape and tells that he needs to hear it. Antonio leads the pilot to a salon , where Ricardo listens to the tape through headphones, and then cries. Ricardo suddenly runs out of the salon, Antonio tries to catch up with him and when catching up on the corner of the house suddenly assassins on passing motorbike shoot Ricardo and Antonio. Ricardo dies, Antonio survives blaming Ricardo for the fact that he drew Antonio into something.

Antonio can only wonder why someone attacked Ricardo, a pilot, released from prison. Recovering from injuries is extremely difficult for the narrator. He damaged some nerves, he lives on pain medication, walks with a cane, he had fits of panic or fear. Antonio sleeps poorly, has nightmares, he begins to fear for his fate and the fate of his family.

South American Vasquez comes from the new generation of writers from this continent. In place of magical realism comes just realism, and a writer always tries to be social conscientious. Time of fairy tales and romance has passed, they were replaced by the cartels, murders and destruction of life.

Vasquez wrote a book about how the drug trade by ricochet kills and destroys those who has nothing to do with it. The narrator until the end of the book is almost in the dark of why pilot Ricardo was killed, only guessing that most likely Ricardo again became embroiled in a cocaine trade. Short communication with the pilot leads to devastating consequences, and nothing can be done, it's like being hit by lightning.

Protagonist of the novel recalls his childhood with a bloody background: drug wars, assassinations, corruption at the state level. That is what drew Antonio to a complete stranger Maya, both victims of a bloody past of Colombia. Two wounded souls have found each other, just for one day and night, but one pain does not help to heal another pain.

The novel is about a man and written by a man, but the fate of women can be traced in it. Almost half of the book is written in the third person from the perspective of Elena, a fragile woman, ready to do good. But the cruelty of the world does not know the good, and the story of Elena, and together with her Maya’s, is a sad story of a failed dream.

Vasquez, with his writer's position as the nation's conscience, is not a dirty realist. His prose is filled with melancholic memories (in a perfect translation), and sublime metaphors. Symbolism in the book balances the grim reality. The novel begins with the story of the escape of a large hippo from the zoo. Animal caused damage to the city and county, and it was eventually killed:

“He’d escaped two years before from Pablo Escobar’s old zoo in the Magdalena Valley, and during that time of freedom had destroyed crops, invaded drinking troughs, terrified fishermen and even attacked the breeding bulls at a cattle ranch. The marksmen who caught up with him shot him once in the head and again in the heart (with .375-calibre bullets, since hippopotamus skin is thick); they posed with the dead body, the great dark wrinkled mass, a recently fallen meteorite; and there, in front of the first cameras and onlookers, beneath a ceiba tree that protected them from the harsh sun, they explained that the weight of the animal would prevent them from transporting him whole, and immediately began carving him up.”

In this story of a hippo is recklessness and cruelty of ones and helplessness of the others.

In The Sound of Things Falling really everything falls: planes, tears, dreams and life. And nothing can be done, we can only listen.

Vasquez’s novel is a bitter thing, but also a reminder that we should keep an eye on Latin American literature, it seems to offer a lot of masterpieces.