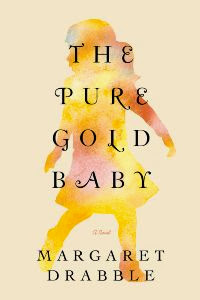 London, early 1960s. Young anthropologist Jess has an affair with a married professor. The affair leads to pregnancy, childbirth of a pretty girl Anna, but the birth of the child in turn leads to a parting with the professor.

Jess keeps the child, explains the situation to the parents, and they generally understand their daughter. Jess in London is surrounded by intellectuals, scholars, poets, TV presenters, young professionals like herself. In her neighborhood Jess is getting acquainted to other young mothers, they walk together with children, take them into the kindergarten. The story is narrated by one of Jess’ friends, Eleanor, a lawyer, now retired. She recalls their youth and tries himself as a writer. Eleanor lived her whole life side by side with Jess. The narrator will notice the difference between 60s and 70s and 2000s.

About The Pure Gold Baby it can be said that this book is heartfelt, but not concentrated. Lying in the heart of the novel the story of a mother and daughter is very touching and humane. Fragile Jess is hardly a strong woman. Nevertheless, she took a strong decision to take care of a sweet but mentally retarded daughter, the pure gold baby from the title. Jess brought up Anna alone without relying on help from someone. All the men in her life were just lovers, romantic interests, flashes of passion, but not the breadwinners, fathers, defenders. Jess alone guarded Anna, making the daughter entirely dependent on her. But Jess herself, unwittingly, has become dependent on her daughter. Jess almost deprived herself of a life - career and possible lasting relationship with a man - for the sake of her daughter. But we can assume that Jess was just afraid to start over, afraid to alienate Anna, let into her life more fresh air.

On the background of relations between Jess and Anna, we read about the changes in England. Real estate prises have risen, manners softened, diet and nutrition appeared. The whole structure of psychiatric institutions changed. State and private investors began to create special schools for people with developmental problems. In place of a madhouse with notoriety came a fashionable clinic, where they began to treat nervous breakdowns and drug addictions. Money of higher classes, suffering from mental health problems, flowed into the clinic.

Drabble on behalf of the narrator then makes digressions from a central plot to insert a reference on Livingstone, television, science, art and so on. These are clever arguments, although they still remain digressions – adding almost nothing to the story.

In addition to the main group of characters the narrator Eleanor focuses on the fate of Jess’ friends, especially to those with whom she was familiar from the hospital. These disgressions are overrepetitious, and none of the supporting characters are really interesting to read about him or her a dozen pages. In fact the entire second half of the novel is more about old acquaintances of Jess, than about her. Anna’s and in some respects Jess’ lives remains static, respectively Eleanor tries to fill this static with the stories. The novel loses his focus, although the end is rather good.

Drabble writes lyrical prose (but without the usually amorphousness), I wish it were more focused. If we return to the title: this is not gold, rather silver.