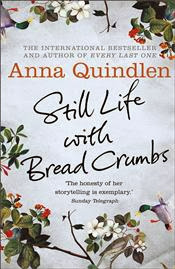 Rebecca Winter, once a successful photographer, a feminist icon, moved out of her apartment on Manhattan to a cottage in the upstate. Rebecca is 60, but she looks much younger. She divorced her English husband (he changes wives every decade), her son filmmaker Ben, who graduated from college, has not yet found his place in life and waits each month for the money from his mother, and Rebecca’s mother Bebe, once a successful pianist, is now in the Jewish nursing home. She does not recognize her relatives, and instead of playing the piano now she plays on everything else that looks like a piano.

Relocation must not only return Rebecca her self-confidence, but also reduce costs. The novel protagonist turns from the photographer into an accountant, whose numbers don’t leave her alone. Renting an apartment minus maintenance minus nursing home paymentminus car insurance minus the check for the son minus cottage rent minus medical insurance - every month Rebecca will be preoccupied with the idea of a possible poverty. Black and white photographs of Kitchen Counter series, among them the legendary " Life with Bread Crumbs", brought her fame and money, when she was under forty. Rebecca lived for many years on royalties. Her photographs allowed her to buy an apartment in Manhattan. But over the years the cash flow dried up, fame faded away (and Rebecca is not sure that she famous at all), and Rebecca couldn’t afford life in New York no more.

Cottage, which Rebecca rents, is in complete wilderness. Among the local population stands the owner of English-style cafe Sarah and her husband Kevin, a former choir singer and now clown Tad and roofer Jim Bates and his bipolar sister Polly, which can not be left alone.

Anna Quindlen is not a debutante in the literature, and it feels. She avoids many of the mistakes made by first-time female novelists writing prose. Moreover, Quindlen even has her own style. And it already means something in a world where only three out of ten can say they have a style.

The author does not take her protagonist and her story too seriously. The novel is full of kind, gentle humor that probably even be called a rural humor. The protagonist of the novel Rebecca is very different from the average chicklit cliched heroine of the novel. She is not about forty but sixty - we can say that the stakes are higher and problems are more pressing. Despite her past (New York, moderate fame and fortune), the heroine is likable mostly because she lacks isterism. She is not angry at the whole world, she is not boiling with anger and envy. Her problem is her problem, not someone else's. In Rebecca’s life there has been a shift, she lost herself , and moving outside the city should significantly if not help her, then at least give a hint of where to go next. Personal and professional qualities are questioned. Unhappy marriage and faded fame let assume that Rebecca is doing something wrong - or even exhausted herself.

Problem world of Rebecca here has as a background a small town. Secondary characters in the novel are great fun. Everyone has their own life story, and by the end of the novel, in lives of each of them changes occur.

Life with Bread Crumbs draws closer to the big literature than to chicklit, having almost no plot, to the extent permissible in commercial literature. Quindlen knows how to tell a story. She does not need flashy, but implausible plots. If you want to talk about how a woman met the right man, there is no need to make a fuss with the aliens, fugitive Nazis or werewolves. Enough to tell how a man and a woman can sit on a tree in silence, eating sandwiches.

Of course, the novel’s end is soppy, but what else to expect from the book, where all essentially boils down to finding the Man? However, the happy ending does not spoil the overall picture. Everyone got what they deserved.

The novel gets to you with gentle humor and humanity. I wouldn’t call this chicklit. Good modern prose; raisins, white bread, not bread crumbs.