How A Gunman Says Goodbye 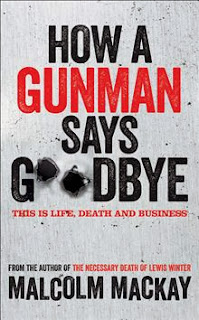 How A Gunman Says Goodbye begins where the previous novel of the trilogy ended. Young gunman Calum MacLean heals his wounds and is not in a hurry to return to work: hitmen have sick leaves, too. But back from such leave is another hitman, working for a local crime boss Jamieson - Frank MacLeod, recovered after hip replacement. MacLeod is a veteran of killing business, who started as a freelancer and later came under Jamieson’s wing, regularly making hits for the boss. MacLeod is already in his sixties, but he has no plans to retire. He longs to work, and he gets it. Jamison should remove a small dealer, a young lad with big plans. MacLeod expects an easy job, but falls into a trap. Jamieson goes against the unwritten rules and calls Calum to help Frank. And the unwritten rule is that if a hitman makes a mistake, then organization will not help him, he is now on his own.

The first novel of the trilogy, The Necessary Death of Lewis Winter, was a solid story of the life of a hired killer, though somewhat predictable. This one is more interesting in terms of plot. Most often, we read about hitmen, who are healthy and working, their killings, but rarely we have a chance to see what happens when a gunman stumbles. How a gunman says goodbye - to the world. The set-up is really complex: the boss and gumnam employee are bound not only through business, but also long-term friendship.

Calum in this novel steps in the shade, while playing an important role. The young hitman has time to think, including what is it, to kill for money. Hired killers in books almost do not think about what they are, how they fit into today's society, what lies ahead of them. Most often, they don’t have time ti think, always something endanger their lives. In Mackay’s books hitmen realize their purpose, in a sense, even meditate on their profession.

Another interesting point, which can be seen in these books - Mackay almost don’t use words like hitman, gun for hire, hired killer, preferring them all gunman. This definition has seemingly neutral tone - a man with a gun, not a killer, just an armed man. Perhaps Mackay so moves away from cliches and tries to create his own mythology, one in which there are gunmen, but not hired killers.

Progress in comparison with the first book is obvious, there is reason to hope that the final novel will be even better.