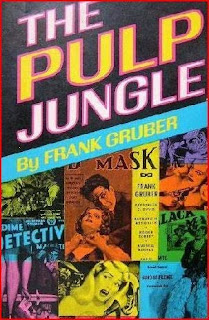 This book is like an accountant ledger. Is it boring? No, absolutely not. It is fascinating.

Gruber lists all his sales during his pulp years, tells how much money he’s made for each story, what rates magazines paid in those years, what markets were the most prestigious. In these dry facts and not less dry and matter-of-fact numbers we feel that era like we can feel the era smelling old pulps.

Gruber started with Sunday school papers, and then made his goal to become a writer after his first sales. Like Tarzan, he went to the pulp jungle – New York - where most of publishing companies were (and still are) – and made it into big time. But not right from the start. Before he conquered New York and dozens of pulp magazines (and subsequently Los Angeles, working later in Hollywood), he lived through years of struggle, barely selling a couple of stories a month and literally starving on the streets of NYC.

It’s a fascinating account of a professional who works and works non stop and who knows that hard work will pay off some time in the future. His story of success Gruber ornates with recallections of other pulpsters, who also made successful careers (some after that vanished somewhere).

While reading this book, one can easily see how many differencies there were between publishing businesses now and then – and how many similarities. Gruber wrote thousands of short stories and novelettes before he’d moved to writing novels (and screenplays). It was not easy, to just write a novel and sell it without establishing your name first.

The book, though, is roughly written and feels like a first draft. But damn, the masters of pulp always wrote only one draft – the first. They couldn’t afford to write many drafts and rewrite their stories. And we shouldn’t ask for more.

That’s the memoirs everyone interested in book history should read.