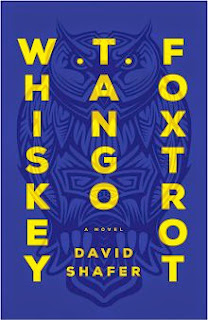 Three main characters of this novel have different ways of life and live at different places on the planet. With the development of the plot their destinies intertwine in unexpected ways, and it is worth noting that two of the three heroes already know each other.

Of these three characters is only one woman, young, exotic Asian working in a non-profit organization based in the United States Leila Majnoun. Leila arrives with humanitarian aid to Myanmar. Her mission is to scout out the situation, find out what help the state needs to provide the best. Regardless of gender, Leila is a brave, courageus woman, with the ability to overcome difficulties. And difficulties Leila has plenty. Her cargo was taken to the military customs. A local general who handles things avoids her. She has almost no allies in the country. In case of emergency no one will come to rescue her. The only help she has is a local taxi driver, but he is powerless against the army. In an attempt to find this general Leila and the taxi driver pulls into a kind of base near the jungle where Leila accidentally sees two mercenaries who speak English guarding something important and secret, otherwise no one would hire the elite troops for protection.

Two other characters of the novel, Mark Deveraux and Leo Crane, once were friends in college, but they parted ways after graduation. Mark settled in Brooklyn, thanks to the success of his debut book in the self help genre, which has sold a huge number of copies. Now Mark is writing his second book, and becomes something of a personal guru/mentor for the boss of a large corporation SineCo James Straw. The big boss was impressed with Mark’s book and as Mark has signed a contract with a subsidiary company of SineCo, that in fact Mark is already working on Straw.

Lifepath of Leo Crain is significantly different from Mark’s. Leo is a failure, with the possible psychological and mental health problems. The son of wealthy parents, he and his several sisters received an inheritance in the form of a company for the production of games and now live on that. Leo abundantly uses drugs, drinks in the morning, is not stable, does not stay long on one job.
David Shafer is a talented writer. He's a great stylist, he has the experience, the characters in his book are full-blooded people. And this talented writer has written not entirely successful novel. «Whiskey Tango Foxtrot» as a thriller is mediocre enough to forget its plot in a few weeks, as a drama, or High Literature, the novel is too uneven and subordinated to a thriller story, as near future SF , it is not cooked enough and with a bend in the theory.

The first half of Whiskey Tango Foxtrot is wonderful. I especially liked how Shafer lets us wonder in the mist and is not in a hurry to open the cards. Under the cards I have in mind the theory of a larger conspiracy: the three central characters as if just live their lives, overcome their difficulties, each struggling with his or her loneliness. In the first third of the book there is no hint to science fiction at all, it's good-quality prose about young professionals. It would be better novel if it remained in this vein - a bitter statement on the harsh reality.

And the characters in fact are all close to the heart, the new American generation, no longer kidults, not yet formed adults, spitting on ideals. The most prominent is Leila, fragile Asian-American, rotating in the men's militarized society, but not even thinking that at any time she can be raped (such an idea only once visited the heroine). Mark of the trio of characters is least sympathetic to us, because of this he’ll get the main mission - to rehabilitate himself in front of friends, himself and humanity in general.

Once Shafer introduces his theory of digital conspiracy plot as the slender design of the novel begins to sag. The idea of a storage server for all the information about the people living on the planet is not new. Only in the last year I have read a few works with a similar idea. And every time the world conspiracy theory with an emphasis on the accumulation of digital information has no valid arguments. This idea usually is built on the arguments usually vague. How really ownership of all the digital information about people can lead to total control over the people? Shafer builds some shaky structure of the future, with no real backups. And since evil can not impress and scare enough, then the threat to peace seems phantom. All the arguments in this case are reduced to the commonplace "to spy on people is bad." This we already know.

Unable to build a potent image of the enemy, Shafer throws his heroes to fight against windmills. Both secret community are so smooth, they do not have any form at all. The mission of the trinity against mythical evil is also doubtful. As in the worst examples of literature of adventure, the world from destruction is necessarily saved by the amateurs. Secret organization entirely relies on the wild girl, alcoholic and plagiarist - apparently the situation inside the organization was quite bad, if it would need to use help of unbalanced people.

The second half of the novel is quite a burden to read. The first one slowly build a story, and that was a plus to the novel. We did in fact read a mainstream novel. The second part is already full thriller, shamelessly overlong, sweetened with melodrama between Leo and Leila, predictable and linear. Shafer writes in the second half still brilliantly, but the story buries stylistic clarity under itself.

Talented author Shafer stumbled with this debut. He writes charmingly, but the plot of this book is very much shaky like tango after whiskey. Or foxtrot after whiskey. There is probably no difference.