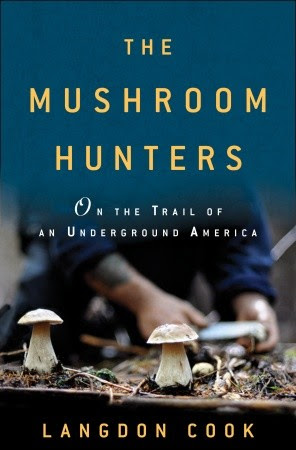 This Langdon Cook book is not without reason called The Mushroom Hunters. It devoted largely to those who pick mushrooms and buys from pickers rather than the actual fungi. And this makes the book incredibly fascinating.

Commercial picking is prohibited in almost all the states of America. To pick mushrooms, you need a permission, and this leads to bureaucracy, payments and fees, and then the taxes. Professional mushroom pickers who live from mushrooms, substantially are illegals. They avoid strangers in the woods, hiding from the rangers and game wardens, and often share the forest areas between themselves. Cook compares mushroom pickers with drug dealers: the level a little bit different, but the activity of pickers remains illegal, and the habits of many pickers are quite like criminal’s. Cook spends time in the company of pickers, buyers, chefs, painting a complex picture of the fungus movement from the edge of the forest to the stomach of a restaurant visitor.

In conversations with Cook the heroes of the book do not hide any secrets of searching and picking mushrooms, on the contrary, Cook generously shares his advices describing in detail the entire process. The abundance of information will not harm the professionals: even after reading several encyclopedias, you still do not learn how to navigate in the woods, you can not determine the presence of the fungus by almost non-existent crack in the ground.

Cook divides his book into chapters by type of fungi and territories where the mushrooms grow. The main characters in the book move from chapter to chapter. Among them are Doug, a former logger and crabber, Jeremy, a former chef, now a businessman trying to create a network of mushroom delivery, and Matt, the chef cook. Cook until writing the book was not new to picking mushrooms, but after a few years spent in the company of professionals, he learned subculture up and down. In addition to contemporary stories, descriptions of life of pickers and buyers, the author makes historical digressions.

The Mushroom Hunters is the history of capitalism and the history of criminals, an amazing tour in the mysterious industry. This book is almost a novel, with the characters, suspense, lively dialogues, lacking only the plot, and you would not exactly distinguish it from fiction. Perhaps the most surprising of all described in the book is how The Mushroom Hunters found a publisher. And the theme seems to be not the most attractive, but the book is an obvious surprise.