The Last Summer of the Camperdowns 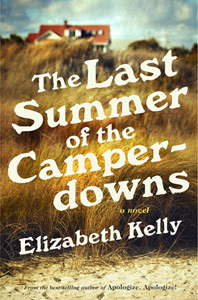 Riddle Camperdown tells the story of the summer of 1972, which Riddle spent with her parents in a family house on the shore of the Atlantic. At the time 12-year-old, Riddle expects the usual summer holiday entertainment, from horseback riding to games with her numerous dogs. But this summer she will have to be on the public: her father Godfrey Camperdown, nicknamed Camp, puts forward his candidacy for Congress.

Strange things begin to happen after one visit of Riddle and her mother to a neighboring farm, where his neighbor Gin lives, in search of the missing dog Vera. While Greer, the girl’s mother, and Gin discuss the Devlins, a rich family, which will yet play a role in the novel, Riddle is looking for a dog in the barn. But instead of a dog Riddle accidentally overhears the strange sounds similar to the sounds of a struggle, some sniffles and the word "why?". Riddle flees in terror from the barn, finds the dog, and then runs home in tears, but does not tell her mother about the causes of her disturbance. Soon the barn where Gin was holding the horses has been burned down. Riddle is actually in panic, because there are rumors that the youngest son of magnate Michael Devlin Charlie is missing. After leaving the house Charlie hasn’t called for five days, and Devlin Sr. is already panicking, involving the police. Camp is sure that Charlie just is having fun somewhere, being pampered with money. Police and family members are hoping for the best so far, not considering the options of kidnapping and murder. Riddle quickly puts two and two together, but she tells nothing about what she’s heard.

Family house at the ocean, horses and children, the shadow of the past - this postcard we've seen already. However, the same view can be described differently, depending on the skill of the artist.
When the book is broken down into individual components, then everything seems familiar, even banal. Love triangle, which stretches from the past; child-narrator, precocious smart and intelligent; secret from the past, which dates back to World War II; a mysterious villain; an eccentric family - the familiar and the accustomed ingredients, the usual components of a decent family drama.
The familiar is not always disappointing, not every novel can be a new word in the literature. Kelly’s sensual prose is one of the most powerful features of the book. On the one hand, the narrator is a 12-year-old girl, on the other the story is told from the present, and thus Riddle in decades could comprehend the events of that summer.

The girl's parents are not less than full-blooded characters: it is a pleasure to read family squabbles, which, although they sometimes cause a laugh, but it's a bitter laugh.
The novel offers an intrigue on two levels. At the domestic level when there is some mystery in a relationship between Greer and the two men. Who betrayed who in their youth? Why had she married one and not the other? Is it all that obviously?

The second intrigue, mainly associated with the missing boy and Riddle’s silence. Part of the secret is known to us, yet something we can guess, but the finale is still impressive. The final part is somewhat crumpled up, although the events at the end are flying with the bullet speed (literally). Connection of the past and present in The Last Summer of Camperdowns does not feel false. Past mistakes, lies, fear, it’s all real here.

A clever novel from the author, whose previous works I’d like to read.