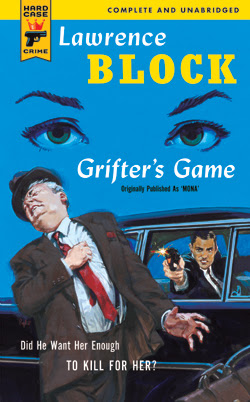 Conman Joe Marlin at the beginning of the novel runs from a hotel in Philadelphia, leaving behind a 600-dollar bill. Marlin lives from scam to scam. He is single and looking for rich ladies whom he can "milk", and milk them to the limit he does, and then disappears. In Philadelphia, his scam has gone wrong: Marlin nearly has been fooled by a con lady, the same as he is.

With the remaining money Marlin comes to Atlantic City, where right on the train station he is stealing other people's bags from storage. Solid-looking, Marlin checks in the hotel by the beach, where he hopes to find a lonely and bored beauty that can be his free meal ticket. In his room Marlin checks stolen luggage and besides clothes finds a bag full of heroin. On the beach Marlin meets stunning Mona, vacationing here with her husband, an elderly businessman. And what a coincidence, that the stolen bag belongs to Mona’s husband Brassard. Quiet husband of Mona is a drug dealer, most likely related to the organization. Marlin has a plan to remove Brassard and pick up Mona and her husband’s money.

«I licked it another time. There was no mistaking the taste, not now, not after many years. When you work in a racket, even briefly, you learn what you can about the racket. You learn the product, first of all. No matter how small your connection with the racket or how little time you spend with it, this much you learn. I had played the game for two months, if that, in a very small capacity, but I knew what I had on my dresser.

I had approximately sixty cubic inches of raw heroin.»

Novel’s plot also does not offer any frills, but Block pays attention to detail and offers a few surprises along the reading. The largest of them is the unpredictable final, hard and somewhat shocking.

Block completes one chapter with a paragraph:

«It was a cheap evening. I didn't risk a penny. I'm not a gambler.»

With Lawrence Block there is no risk: you pick any of his books, and they are all good.
Автор: Ray Garraty на 10:06 PM