League of the Grateful Dead and Other Stories 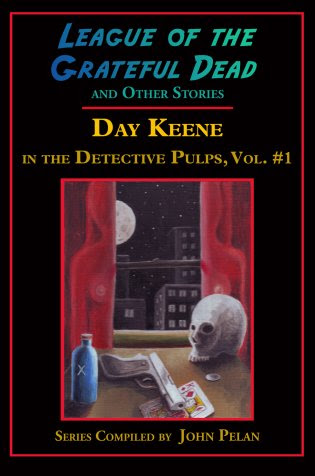 Day Keene
League of the Greatful Dead and Other Stories

This is the first collection of short stories by Day Keene, which he wrote for the pulp magazines. In fact, Ramble House plans to publish all the Keene’s stories (three volumes already had been published)!

This volume consists of eight short stories, or even novellettes, judging by the number of words, and they are all excellent. Day Keene was certainly a master. Conventionally, all the stories from the book can be divided into three categories: noir, a mystery with the elements of the supernatural and the old good private eye stuff. Only one story, «Nothing To Worry About», is pure noir and it’s anthologised in «Best American Noir of the Century», edited by Ellroy and Penzler. It's a grim story about a district attorney who wanted to kill his wife, who did not give him a divorce. And this is the shortest story in the collection.

The category of the supernatural mystery also consists of only one story, titled «League of the Grateful Dead». In it mysterious events happen: some people crumble to dust in front of witnesses, and a man says that he is the devil who came down to Earth. Keene masterfully creates growing tension: will the hero of the story have to fight with Satan, or there will be a logical explanation. Another plus to the well-plotted mystery is also the choice of the protagonist. He is a drunkard, a former surgeon who started to drink, after losing his job after a series of unsuccessful operations that led to the deaths of the patients. And if the ex-surgeon had not been picked up by a local reporter, and received from him a roof over his head, the drunkard would have died in the gutter.

In the other six stories case of varying complexity is investigated by private detectives (or trouble-fixer, as in «Marry the Sixth for Murder»). PIs in Keene’s stories are often men who can shoot, but they have brains, too, too long they worked in their lines of bussiness, too often they were into jams. Private detectives there are working in the post-war times, and then they served at the war in Europe. Private eyes are not alone. He usually has a wife or girlfriend, he has links to the police, though police give them a hard time. In some stories, detectives receive a lot of money from a client, in some they work for free, as, for example, in «Fry Away, Kentucky Babe!»:

«... Some man there ... had told her that while I charged enormous fees I was always willing to give a former service man a break and I almost always got results».

The book is full of fist-fights, shootings, self-irony so you will get a lot of fun. I should also mention the sleek Keene’s style - no fat, only muscle and nothing else:

«I lighted a cigarette while I thought it over. It was strictly business with me. Private eyes are dime a dozen along The Sunset Strip and I couldn't keep meat on the table if it wasn't for the annual retainer Consolidated pays me to pry their bad girls and boys out of the minor jams that might affect their box- office value. But this wasn't a minor jam ».

I hope that I’ll continue my knowing of Keene’s fiction very soon.