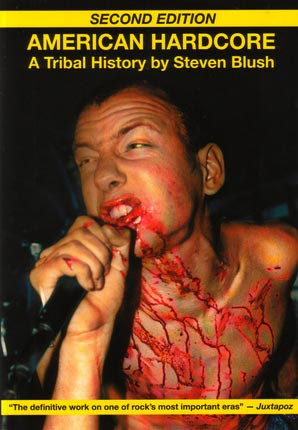 I should start with that: this book is an absolute must-have for all fans of hardcore. Stephen Blush did a great job, took more than a hundred interviews, listened to hundreds of records, found hundreds of flyers, compiled a detailed discography of American music of the suburbs.

The book consists of four parts. In the first author tells about the birth of hardcore movement, the second one focuses on the groups themselves, by region, in the third section the book reveals the principles of the DIY-culture, and the final one tells the different versions of why the hardcore ceased to exist in the form in which it was originally. As I’ve written above that Blush "tells" I was cunning. Fragments of text written by the author there are minimized. Blush just writes short «glue pieces», as if leading the participants to their stories. Book by 90 percent consists of fragments of interviews with musicians, promoters, artists, fans who did hardcore in the early '80s. Juggling quotes are always a dangerous thing, but there is no criticism to the author.

The book not only tells "how it was" through the eyes of the participants, but also helps to understand some important things about the hardcore.

Punk is not equaled hardcore. If British punk bands played daring music at the time, they somehow belonged to the music industry. Punk bands had a team of producers, they were signed to major label, promoters of the record companies booked tours for them. Hardcore was completely DIY. Musicians themselves recorded and sold their music, without the producers went on tour, barely scraped for gasoline and for food.

Even the most hardcore stars at the time were little known outside of the subculture. The names of Henry Rollins, Jello Biafra, GG Allin etc which now seem loud, but when hardcore was born and grew, a hardcore group did not gather stadiums. The group played in front of 15 fans, and it was fine. Over time, the emphasis has shifted, and those groups that were the most famous and influential became half-forgotten, and less popular in the early 80's bands became popular now.

Hardcore was not only music, it was a movement. The book details the idelogy, the stylistic divisions between hardcore fans, and the constant feud between members of the movement.

Hardcore came from the suburbs, and the movement embraced not only the centers of culture, but also all the major states. Regionally hardcore was very different, and the «American Hardcore» opens your eyes to it. You have to understand the specifics of the region to understand the music that was created in the region.

After the release of the book Steven Blush had a lot of complaints, mostly related to the fact that he spoke disparagingly of those groups that have ceased to play hardcore and started playing something else. We should understand the author: if you had been in an subculture from the very roots, and then you saw how it all had broken down, you are inevitably drawn to something familiar, to that you once loved.

Of course, some bands in the book are devoted whole chapters to, and some only a paragraph, but the book is not rubber, it is impossible to please everyone, and it is impossible to add everything. It is difficult to say whether the book will interest a person who was never in hardcore, but for hardcore fans, this book is indispensable. «American Hardcore» has become my reference book for a long time.
Автор: Ray Garraty на 2:28 AM